Rupture of the right ventricular free wall after myocardial infarction

Patient, 75 years-old, with free wall rupture of the right ventricle, corrected with prolene 3.0 points anchored in bovine pericardium patch, promoting the closure of the rupture. The patient was discharged on the 59th day after surgery in good clinical ans laboratorial conditions.

The cardiac rupture was described by William Harvey in 1647 [1]. In 1850, Joseph Hodgron established the relationship between the cardiac rupture and obstructive coronary heart disease [2]. With high mortality, the natural history of this disease began to change with the first reports of successful surgical correction, performed by Hatcher et al. [3] (1970), and FitzGibbon et al. [4] (1971).

Among the mechanical complications of myocardial infarction, rupture of ventricular free wall is the most serious, with an incidence of 10% in the left ventricle [5]. Regarding the evolution time, the acute form is characterized by sudden rupture and massive hemorrhage into the pericardial cavity, followed by death in most cases.

In some patients, however, bleeding into the pericardium may be slow and repetitive, with thrombus formation between the epicardium and the pericardial cavity, which contains the bleeding. In such situations, cardiac rupture is called subacute, and the patient can survive for hours or days, which opens the possibility for eventual surgical intervention with success [6-8].

75-year-old male patient, caucasian, went to the emergency room of the Hospital Regional of Presidente Prudente - São Paulo - Brazil, complaining of progressive dyspnea for one week, that worsens with exertion, and edema of lower limbs for 2 days. Physical examination revealed the following: in regular condition, pale, hydrated, no fever, tachypnea, dyspnea, and cyanosis of the extremities (2+/4+). Blood pressure: 90 x 70 mmHg, heart rate: 90 beats per minute, respiratory rate: 25 breaths per minute.

On cardiac auscultation, heart sounds were hypophonetic, rhythm without murmurs in two stages. On lung auscultation the vesicular murmur was present, with reduced bases with bilateral wheezing. The abdomen was distended and tense, painless on palpation. Lower limbs were swollen (2+/4+). The chest x-ray showed an enlarged cardiac silhouette, and blurring of the left costophrenic angle.

The electrocardiogram showed ST segment supraunleveling in leads from V1 to V4 of 2 mm. The cardiac enzymes (creatinine phosphokinase - CPK, CPK-MB, and T/I troponin) were within the normal pattern. The transthoracic echocardiography showed rupture of the right ventricular free wall of 4 mm in diameter, without the Doppler flow signals. There was also signs of pericardial effusion with tamponade, major segmental dysfunction (ejection fraction 30%) of the left ventricle with anteroapical aneurysm and thrombus. The mitral valve showed mild/ moderate reflux, and left ventricular diastolic diameter was 76 mm. Figure 1 shows the chest X-ray, and echocardiographic and intraoperative spect of the rupture.

We perfomed systemic heparinization of 4 mg/kg, cannulation of the ascending aorta and right atrium with a single dual-stage cava, installation of cardiopulmonary bypass (CPB) with hypothermia at 33ºC. After stabilization of CPB, we performed aortic clamping, isothermal blood cardioplegia - administered antegradely every 20 minutes. We remove all adherent clots in the heart and visualize the orifice of the right ventricle rupture. The left ventricular aneurysm was approached by longitudinal incision over the anterior interventricular artery. After its opening, we observed a thrombus with recent aspect with diameters of 6 x 6 cm, which was removed. The septal wall was pale and friable, unlike the left ventricle lateral wall that had aspect of viable tissue. We corrected the rupture of the right ventricle through the septum using prolene 3.0 stitches anchored in bovine pericardium patch, promoting the closure of the right ventricle rupture.

After, we performed the correction of the aneurysm using a technique similar to that proposed by Braile et al. [13] in 1991, and presented by Silveira Filho et al. [14] in 2011. We use a circular patch of bovine pericardium, excluding fibrotic septal wall to reconstruct the left ventricle ("endoventricular circular plasty"), in order to maintain a more physiological cavity. We also peformed revascularization of proximal left anterior interventricular branch using aortocoronary graft from left saphenous vein (Figure 2). 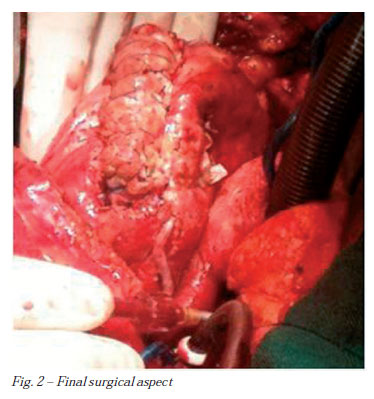 We established patient rewarming at 37ºC, removal of air cavities, unclamping of the aorta after 102 minutes, and after return of heart rate and hemodynamic stability with dobutamine (5mg/kg/min) we disconnected cardiopulmonary bypass after 135 minutes. We reviewed the plans for hemostasis and synthesis. Patient was hemodynamically stable on dobutamine until the 3rd postoperative day, where he was extubated. Presented with sternal wound dehiscence and mediastinitis on the 10th postoperative day and underwent resuture wound with antibiotic therapy and maintained for 21 days. The 30-days control echocardiogram revealed a reduction of the left ventricular end-diastolic diameter to 55 mm, improved ejection fraction (49%), mild mitral valve insufficiency, as well as closure of right ventricular rupture successfully. The patient was discharged on the 59th postoperative day in good clinical and laboratory condition. This study was approved by the Ethics Committee in Research of Universidade do Oeste Paulista, No. 002/RC on 01/10/2010.

Knowledge of disease progression is needed to ensure accurate and timely diagnosis. Due to the rapid deterioration of these patients, there is a mortality rate of 50-80% in the first week, if not treated. With surgical repair, patients can extend survival to five years to 65% 5. Some authors claim that the myocardial rupture focuses preferentially on singlevessel disease patients. Others suggest the prevalence of triarterial coronary atherosclerosis disease [15]. Abreu Filho et al. [6] found that 33.8% of patients had single vessel coronary artery disease and Sá et al. [8] found that 66.7% of patients with ventricular septal rupture after acute myocardial infarction had one-vessel disease.

The anterior myocardial wall is mentioned by several authors as the most likely to suffer ruptura [7], however, authors such as Padró et al. [16] argue that cardiac rupture may also occur in any region of the left ventricle, other authors observed higher incidence of rupture in lateral ventricular wall (44%) [14]. Probably the increased stress on the myocardium lateral wall, resulting from the contraction of the two papillary muscles adjacent to the mitral valve, may facilitate the onset of rupture.

Many patients with myocardium free wall rupture die suddenly, often even without a diagnosis. Abreu Filho et al. [6] observed 98 (77.2%) patients in these conditions, of which only 5 (5.1%) underwent surgery with one (20%) survived. The subacute form, in turn, has more slow involvement, allowing its identification and allows for a possible surgical correction. Its exact incidence is not well established, some authors estimate in 30% the occurrence of subacute cardiac rupture after myocardial infarction.

The treatment of ventricular free wall rupture is essentially surgical. Abreu Filho et al. [6] performed cardipulmonary bypass by this via in five patients with acute cardiac rupture and in six patients with subacute cardiac rupture with unstable clinical presentation. In the first series of cases, surgical correction was performed with the aid of cardiopulmonary bypass and infarctectomy through the affected area.

In the 80's, techniques were proposed seeking the tamponing of the rupted area, by suturing the Teflon patch on the normal subjacente myocardium [16]. With the development of biological glues, alternative procedures to the use of cardiopulmonary bypass and those to avoid the infarctectomy are now used. This method has proved to be the most efficient way to control bleeding and prevent recurrence of rupture [6]. Padró et al. [16]reported treatment of 13 patients with subacute rupture of the left ventricle using this technique, with 100% long-term survival. In the case of right ventricle rupture specifically, we can observe in the literature, reports of right ventricular wall dissection [9-11] after septal rupture after myocardial infarction. However, this case demonstrates illustratively as the figures shown, it deals with right ventricular free wall rupture with intact ventricular septum.

Thus, we conclude that this patient presented with myocardial infarction over a week of evolution, caused by obstruction of the proximal anterior interventricular branch, without treatment. He evolved clinically with signs of heart failure, presenting a serious complication, a little reported in the literature, that was the subacute rupture of the right ventricular free wall.