We report the case of a 58-year-old patient, with a three vessel disease with unstable angina. Due to refractory angina, she was referred to urgent coronary artery bypass graft (CABG). In the preoperative evaluation were found severe obstructive lesions in the brachiocephalic trunk origin, left common carotid origin and left internal carotid artery. The patient underwent CABG, supra-aortic trunks revascularization (extra anatomic bypass) and carotid endarterectomy in the same procedure. She presented an uneventful recovery and was discharged home on the seventh postoperative day. Currently, two years after the procedure, she continues under follow-up, symptomless.

The prevalence of significant stenosis (> 80%) of internal carotid artery in patients undergoing coronary artery bypass grafting (CABG) can reach 12% and, notoriously, is associated with the risk of cerebrovascular accident (CVA), which varies from 11% to 18% [1]. In this situation, carotid endarterectomy before CABG or concomitant decreases the risk of stroke. The prevalence of stenosis of the supra-aortic trunks (SAT) in patients undergoing CABG is much lower, about 0.1% to 0.2% [2], but it represents a challenge regarding the definition of the strategy used in its handling.

The objective of this study is to report the case of a patient with acute coronary syndrome, with triple vessel involvement, whose preoperative evaluation found significant stenoses (80%) generated the SAT associated with 90% stenosis of the left internal carotid artery which was surgically treated. 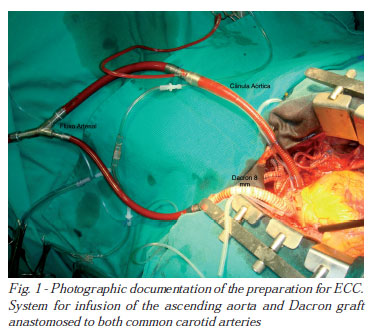 Myocardial revascularization was performed with ECC in moderate hypothermia (32ºC), and myocardial protection obtained with the infusion of blood cardioplegic solution (4:1) cold antegrade and retrograde induction every 15 minutes. Then, with a temperature of 32ºC, the ECC blood flow was stopped in the long extension of theY Dacron graft (anastomosed to the carotid arteries) and the implant was performed using the dacron graft (Y to both carotid arteries ) in the ascending aorta (Figure 2), with terminolateral anastomosis. 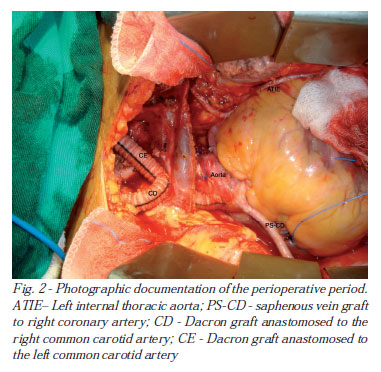 After that, we performed the opening of the aortic clamp, recovering the heartbeat and removing ECC. The closure of the chest was performed in the usual way, with mediastinal drainage. The cervicotomies were closed without the use of drains. In the immediate postoperative period, after extubation, antiaggregation was initiated with acetylsalicylic acid.

The patient had a good postoperative evolution, regarding both hemodynamic and neurologic aspects. She was discharged on the seventh day after surgery. Currently, two years after surgery, the patient is receiving outpatient treatment, showing no symptoms.

The presence of significant obstructive atherosclerotic disease of SAT in patients undergoing CABG is quite uncommon (0.1% to 0.2%), but it represents a formidable challenge when defining the surgical approach. The problem is that these patients present greatest risk for neurological events. In the literature, there is not any appropriate casuistry to examine this outcome in this population. Thus, the possible increased risk for neurological events is extrapolated from series of patients undergoing CABG and who have obstructive atherosclerotic disease in the internal carotid artery, subjected the brain low flow in the pre-and postoperative period. In these patients, endarterectomy performed simultaneously [3], or even preceding [4] CABG is associated with low incidence of neurological events. The present patient had significant stenosis (approximately 80%) at the origin of the LCCA and BTC associated with stenosis of the left internal carotid artery but no symptoms related to these obstructions were observed. The treatment of obstructive diseases of SAT is indicated, in most cases, in symptomatic patients. However, critical stenosis (greater than 80%) [5] in cases where the patient is subjected to sternotomy for other reasons, the treatment is recommended regardless of symptoms [6].

The particularities of the case described here is the concomitant presence of obstructive disease in two SAT, the left carotid bulb and acute coronary syndrome with an indication for emergency CABG. The decision to perform the bypass for both common carotids, besides endarterectomy of the left carotid artery concomitant to CABG, was made considering the indications described above. It was also considered the likely low flow in the brain in the pre-and postoperative period consequent to the sum of obstructive lesions in the origin of the SAT and the left internal carotid artery, which could result in a neurological event. Following these principles, the SAT and revascularization of the left internal carotid endarterectomy was performed before initializing the ECC. Thus, the brain flow during ECC was ensured by the cannulation of the Dacron graft (anastomosed to the carotid arteries) (Figure 1).

Although we consider the possibility that this strategy could predispose to cerebral hyperperfusion syndrome [7] due to the function of cerebral blood flow during ECC, we chose to use it because the patient did not show reduced blood flow to the brain before the procedure, taking into consideration its asymptomatic aspects, and the low flow during ECC would represent a higher risk for a neurological event.

The chosen strategy for the treatment of obstructive disease of SAT, either endovascular, transsternal or transcervical surgical, it is also controversial [6]. The endovascular management of atherosclerotic stenoses of SAT has been suggested as an option with low morbidity. However, the medium and long term outcomes of this technique seems to be inferior than the extra-anatomic bypass [8]. In addition, the patient described above, we believe that the refractory angina was a high risk factor for the realization of endovascular treatment.

The extra-anatomic bypass of SAT performed via transsternal revascularization is associated with good late results, with acceptable levels of morbidity and mortality [7-9]. In the case described in this article, the bypass of the ascending aorta was performed to both common carotid arteries inserting Dacron graft. The common carotid arteries were isolated through two lateral small interventions. The anastomosis of Dacron graft were terminolaterally performed in both carotid arteries. In the literature [9], it is recommended the section of the carotid artery and anastomosis only in those cases with symptoms consistent with embolization or when obstruction plaques are ulcerated. In conclusion, the presence of obstructive disease of SAT in asymptomatic patients undergoing CABG is unusual and requires treatment planning aimed at minimizing the risk of cerebrovascular accident, without significantly increasing the operative morbimortality. We believe that every case deserves evaluation and judgment according to its peculiarities. In the case described in this article, considering the need for urgent CABG, we believe that the best option was performing CABG and revascularization of SAT at the same time via transsternal revascularization associated with the endarterectomy of the left internal carotid artery.