Atrial fibrillation (AF), the most prevalent cardiac arrhythmia, is a costly disease associated with significant morbidity and mortality. There are two modalities of treatment for AF: rate control and rhythm control. Rhythm control is preferred in cases in which sinus rhythm (SR) is expected to be maintained after cardioversion. Direct-current cardioversion is frequently used to restore SR in patients with AF, but the recurrence rate of AF after direct-current cardioversion is 50% after six months[1]. There are many predictors of SR after cardioversion of AF, of which BNP/NT-proBNP is a commonly described one.

Evidence from several studies supports the relationship between BNP/NT-proBNP and AF recurrence before electrical cardioversion, but other studies have failed to find an association. In 2011, a meta-analysis by Tang et al.[2], which included 10 trials and 618 patients, concluded that higher plasma BNP levels are associated with a greater risk of AF recurrence. Since 2011, nine additional randomized controlled trials were published with double the sample size and that contained information on the association between BNP/NT-proBNP and AF recurrence.

Under this circumstance, this updated meta-analysis was conducted to reveal a wealth of evidence and provide more valid information for clinical practice.

This analysis was performed according to the guideline of the Meta-analysis of Observational Studies in Epidemiology Group[3]. Medline and Embase databases were used to identify relevant publications indexed between January 1980 and August 2016, using the following key words ["natriuretic peptide" and "atrial fibrillation"] or ["atrial fibrillation" and "cardioversion"] or ["atrial fibrillation" and "electrical cardioversion"]. We reviewed abstracts except for articles that focused on natriuretic peptide in AF cardioversion, for which we obtained full text. A review for the references of identified studies was conducted and limited the language to English. The corresponding authors were contacted if further unpublished data were needed. And a manual search was also conducted for relevant review articles and for abstracts of the scientific sessions of the American College of Cardiology, the American Heart Association and the European Society of Cardiology for the past five years.

Studies were considered eligible for inclusion in our meta-analysis if they meet the following criteria: (i) they were observational studies; (ii) they evaluated the potential relationship between plasma BNP/NT-proBNP levels before cardioversion and AF recurrence after successful electrical cardioversion; (iii) they used AF recurrence rates as an index of the outcome; and (iv) they used a follow-up period of ≥ 5 days. The 5-day follow-up was decided on the basis of the 2010 European Society of Cardiology guidelines, which indicate a late recurrence of AF that occurs more than five days after successful electrical cardioversion[4].

To examine biases in the studies and their effects, quality assessments according to the following criteria were conducted: (i) whether the inclusion criteria and the end of the event were clearly defined; (ii) whether the follow-up period was adequate; (iii) whether all cases were followed up (i.e., withdrawal rate was <20%); (iv) whether confounding and predicting factors were distinguished; and (v) whether there was a clear description of the detection system used to identify the incident endpoint.

Two reviewers independently extracted data from each study. Results were compared, and any disagreements were resolved by consensus. The extracted data included first author, patient characteristics (e.g., left ventricular ejection fraction (LVEF), AF duration, follow-up period), AF detection methods, number of AF recurrence and SR-maintaining patients, and mean and standard deviation (SD) of BNP/NT-proBNP concentrations in the AF recurrence and SR-maintaining groups. If the documents provided medians and range, the method of Hozo et al.[5] was used to calculate the mean and SD.

Data were collected and analyzed using STATA software (version 12.0 STATA Corp., College Station, TX, USA). Cochrane's Q test is the most commonly used method to evaluate heterogeneity. In our article, the result of this test is shown by I2, because the I2 statistic describes the percentage of variation across studies that is due to heterogeneity rather than due to chance. I2 = 100% x (Q-df )/Q. I2 is an intuitive and simple expression of the inconsistency in studies' results. We considered an I2 statistic of 50% or more as indicative of a considerable level of heterogeneity; if I2 >50%, the random effects model was used[6]. Otherwise, the fixed effect model was used. We planned to perform sensitivity analysis and subgroup analysis to explore the potential influence of heterogeneity.

Our initial literature search identified 1,064 studies (Figure 1), of which 19 were selected in our analysis[7-25]. A total of 1,373 patients were enrolled in these studies: 657 cases were classified in the AF recurrence group and 716 in the SR-maintaining group. Basic characteristics of the 19 studies are shown in Table 1.

Findings from the meta-analysis related to the relationship between plasma BNP/NT-proBNP level and AF recurrence after successful electrical cardioversion in patients with AF are shown in Figure 2. When data were pooled across studies, the baseline BNP/NT-proBNP levels in the AF recurrence group were significantly higher than those in the SR-maintaining group (SMD -0.70, CI [-0.82, -0.58]). 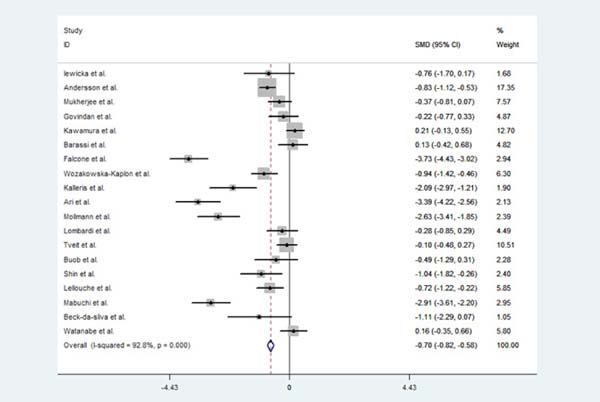 Evidence of significant heterogeneity was observed (P<0.0001; I2=92.8%). We analyzed the heterogeneity using the random effects model. To explore potential reasons for heterogeneity, we conducted a subgroup analysis to investigate the effect of follow-up duration on BNP/NT-proBNP levels between the SR and AF groups, because the duration of the follow-up period was a major difference in the included studies. This subgroup analysis showed in the long-term follow-up subgroup (defined as followup >1 month) (SMD -0.63, CI [-0.78, -0.47]) and the short-term follow-up subgroup (defined as follow-up of ≤ 1 month (SMD -0.82, CI [-1.02, -0.62]), baseline BNP/NT-proBNP levels in the AF recurrence group were significantly higher than BNP/NT-proBNP levels in the SR-maintaining group (Figure 3). This indicated than BNP/NT-proBNP concentrations in the AF recurrence group were significantly higher than those in the SR-maintaining group. 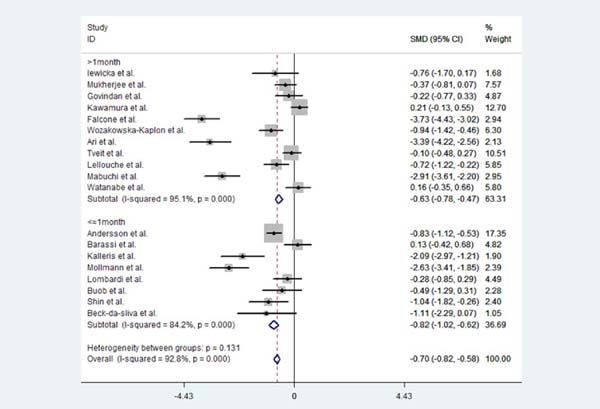 When the study with the shortest follow-up[21] was discarded, the sensitivity analysis produced results similar to those obtained when this study was included (SMD -0.69, CI [-0.81, -0.57]). The heterogeneity was observed in our analysis, which may be attributed to differences in patient characteristics, such as etiology, AF duration, age, and heart function. Possible language and publication biases may also be considered. Distribution of data points on a funnel plot (Begg test) indicated that bias were possibly related to language and publication bias (Figure 4). 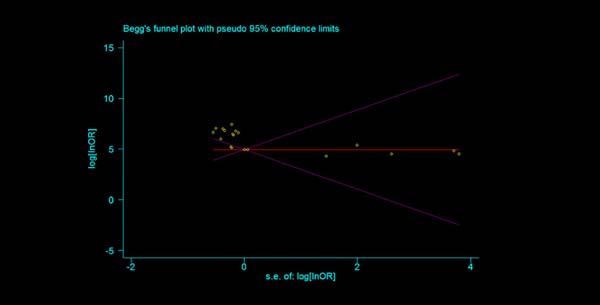 B-type natriuretic peptide, a neurohormone, is synthesized as a prohormone in the heart in response to increased myocardial wall stress from volume or pressure loading and other factors. The peptide proBNP is cleaved into BNP and the biologically inactive fragment NT-proBNP. BNP is secreted primarily by ventricular myocytes. In the patients in our analysis, which mainly have preserved ejection fraction, high BNP/NT-proBNP level may have occurred for a different reason. In patients with AF, there is evidence that BNP is secreted by the atrium. Tuinenburg et al.[27] studied atrial BNP gene expression in patients with paroxysmal and persistent AF and found that the atrium was the major site of BNP gene expression. Silvet et al.[28] found that the increase in BNP levels after atrial stretching and volume overload was closely related to chronic AF. In addition, pathologic changes such as the enlargement and fibrosis of the atrium may also cause increased BNP[29]. BNP levels may also reflect a higher degree of systematic inflammation, which is consistently associated with AF[30]. The question of whether BNP/NT-proBNP can be used as an effective indicator in the proactive prevention of AF or its recurrence or in the likelihood of success of cardioversion treatment has, therefore, attracted wide attention.

The present updated meta-analysis of 19 AF-related publications[7-25] showed that after successful electrical cardioversion, AF was more likely to recur in patients with high, rather than low, plasma BNP/NT-proBNP concentrations. This indicates that plasma BNP/NT-proBNP level is a predictor of AF recurrence. Our subgroup analysis achieved the same result, regardless of the long- and short-term follow-up period, which indicated that the baseline BNP/NT-proBNP concentrations may be a predictor of AF recurrence after successful electrical cardioversion. Distribution of data points on the funnel plot graph after application of the random effects model indicated possible language and publication biases.

A limitation of this study is the significant heterogeneity, which probably reflects several differences between the included studies, such as patient characteristics. Nevertheless, we failed to observe a significant difference between studies with short- long-term follow-up. Another potential factor contributing to the observed heterogeneity is the difference in patient characteristics, such as etiology and ejection fraction. We included patients with AF with varying etiology; details of the etiology were not always available, even though the majority of studies included patients with preserved LV systolic function, and details on diastolic or left atrial function were not always available. Differences in these variables may account for the observed between-study differences as well as the significant in-study variation, which is evident in the wide SD of BNP or NT-proBNP levels observed in many studies.

5. Hozo SP, Djulbegovic B, Hozo I. Estimating the mean and variancefrom the median, range, and the size of a sample. BMC Med Res Methodol.2005;5:13.