Does the coronary disease increase the hospital mortality in patients with aortic stenosis undergoing valve replacement?

For holders of aortic stenosis (AoS), the start of symptoms represents a critical point, by reducing life expectancy. In the 1950's, Kirklin et al. acquired unsatisfactory results with the surgical treatment of the aortic valve [1]. In the following decades, the aortic valve substitution (AVS) became an efficient therapeutic alternative [2], achieving better results than those in drug or percutaneous treatments [3]. The profile of the patients submitted to AVS has changed over the last few years, with an increase in the proportion of high risk patients [4,5]. The surgical treatment combined of the coronary artery disease (CAD) + AoS represents about 15% of the cardiac operations currently performed in the United States [6]. In the early 1990's, Lytle et al. [7], revising the operative results of the Cleveland Clinic Foundation, observed that the isolated surgical approach in the aortic valve had a negative impact in the operative mortality of patients holding valvar lesion combined to CAD. More recently, Florath et al. [8] reported a significant reduction in operative mortality of patients submitted to the combined procedure.

This study aims to evaluate the influence of CAD, in hospital mortality of patients holding AoS, submitted to AVS isolated or combined to myocardial revascularization (MR).

Perspective observational study (Coorte), involving two consecutive groups of patients, holders of AoS, associated or not to critical CAD, submitted to AVS, combined or not to RM, operated at the InCor-HC-FMUSP, between 2001 and 2006. Not including: patients submitted to any other combined surgical procedure; operated for acute endocarditis; holders of AoS associated to aortic insufficiency; submitted to any other previous heart surgery, other than the conservative surgical treatment of AoS; with more than one previous aortic valve operation; previous AVS, urgency or emergency. The patients were divided in two groups: 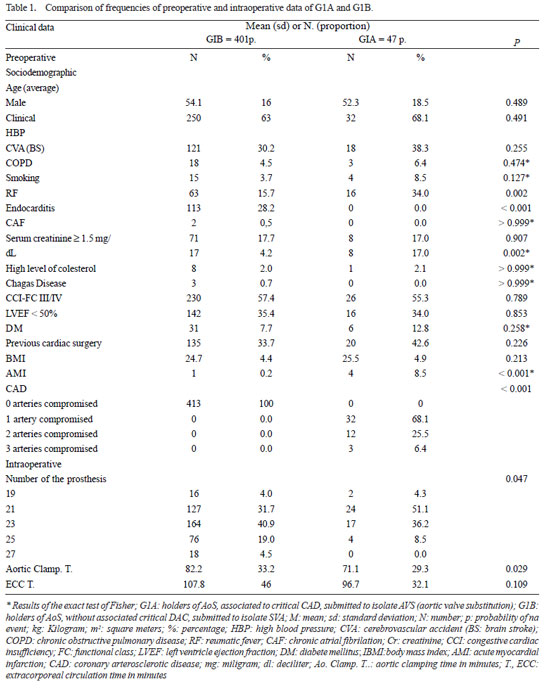 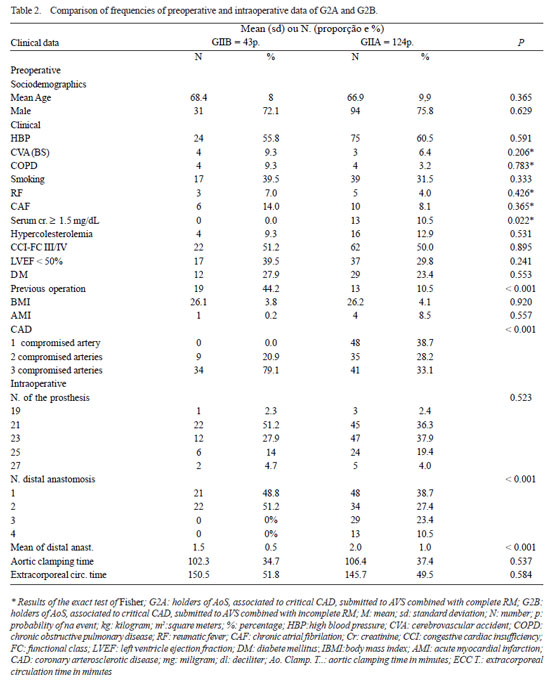 For the statistical analysis in the group composition evaluation, the following tests were used: qui-square test, t of Student and exact test of Fisher, followed by multivariate analysis (logistical regression model). Admiting statistical significance level of P < 0.05. The Hosmer-Lemeshow test was applied to test the model adjustment. The hospital deaths were considered routinely. 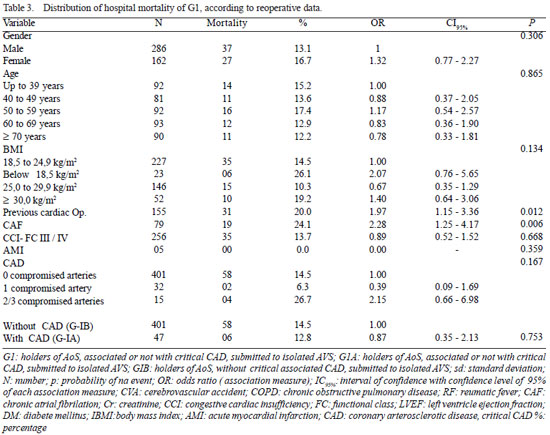 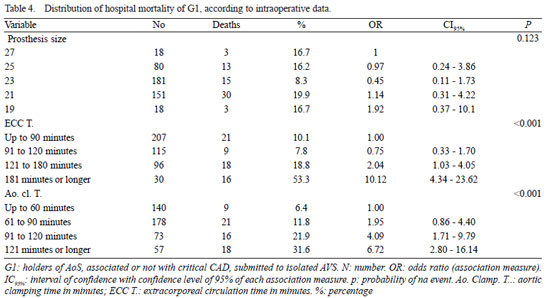 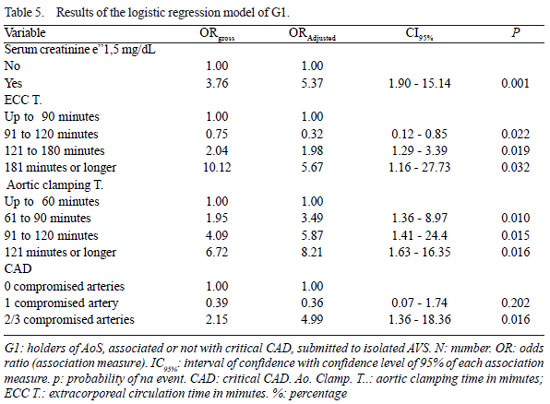 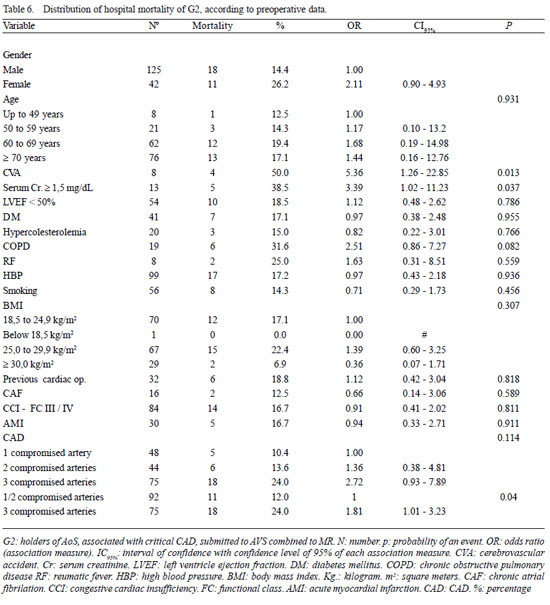 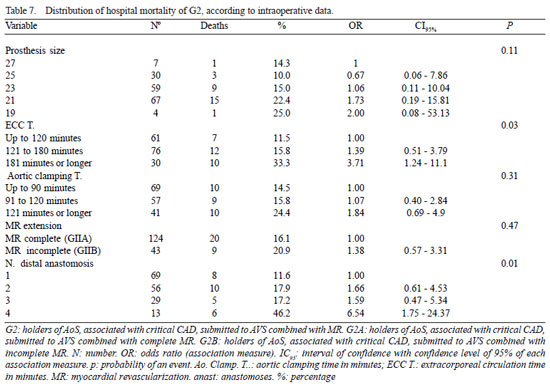 In G1, it was observed that the presence of more than one coronary artery critical lesion, determined risk of hospital death 4.99 times higher than in patients without this association. Lytle et al. [10,11], revising data in the Cleveland Clinics, between 1972 and 1986, observed that out of 1689 patients submitted to isolated AVS, 181 presented critical associated CAD and in this subgroup, the operative mortality was two times higher than in the pacientes without associated CAD. In this study, the CAD was not only analyzed as a binary variable but also stratified according the number of coronary arteries with critical lesion, thus, it was observed that the "statistic behavior" of the one artery compromised patients was similar to the patients without associated CAD, which explains what was observed when G1 was stratified, due to the presence of critical associated CAD (binary form), hospital mortality in G1A was similar to G1B, noting that the preoperative and intraoperative data analyzed was rather similar in both groups. The absence of death among three arteries compromised patients, the proximity of "statistical behavior" of the uniarterial patients (part of group GIA) compared to the patients without critical associated coronary atherosclerotic lesion (group GIB) and the high proportion of one artery compromised patients in GIA approximated the hospital mortality of the patients without associated CAD or one artery compromised.

It can be concluded that: