OBJECTIVES: The aim of this work was to analyze the dominance patterns of the circulation of the human heart, the number of branches from the right coronary artery to the left ventricle, the number of branches from the left coronary artery to the right ventricle and the frequency and location of intercoronary anastomoses. METHODS: Casts were made of 25 hearts by the injection of colored acrylic resin and subsequent corrosion using hydrochloric acid at the experimental surgery laboratory of Furb. Specimens with lesions or scars were discarded. RESULTS: The hearts, from both men (17 - 68%) and women (8 - 32%), had a mean age of 40.2 (15 to 70) years-old. Right dominance occurred in 18 (72%) subjects, with 1, 2, 3 and 4 branches leading to the left ventricle in 2, 14, 2 and 2 casts, respectively. Left dominance occurred in 5 (20%) with 1 branch leading to the right ventricle in 4 molds and 2 in one. Balanced circulation was observed in two molds (8%). There were significant differences between right and left dominance (a > 5%) and between right dominance and balanced circulation (a > 5%), however the same was not true between left dominance and balanced circulation (a < 5%). CONCLUSION: The most common form of coronary circulation is right dominance with an average of 2.16 branches leading to the left ventricle: when dominance is left, the average is 1.2 branches. No intercoronary anastomoses were observed.

Left dominance seems to be associated with higher mortality due to acute infarction and a higher incidence of arteriosclerosis [3]. Because of the importance of the anatomy in the planning of coronary disease surgeries, the dominance of the circulation is a common theme for discussion in the literature.

The number of branches, their location and the myocardial mass irrigated are factors that determine the choice of therapy in all coronary artery bypass grafting (CABG) surgeries; thus surgery is preceded by a detailed analysis using angiographies.

With the aim of contributing to the understanding of the coronary anatomy and, thus, to heart surgery, this work was designed with the objective of determining:

This study was carried out in the Experimental Surgery Laboratory of the Health Sciences Sector of the Blumenau Regional University Foundation (FURB) and was approved by the Research Ethics Committee of that institution.

The Nomina Anatomica (1987), norms for the presentation of works of UFPR and the guidelines of the Brazilian Association of Technical Norms (ABNT) were utilized during the preparation of this work. The classification of coronary artery dominance was described by Schlessinger [6].

Twenty-five fresh human hearts, donated to FURB for studies and removed after thoracic-abdominal incisions and sectioning of the ribs, were dissected preserving the aorta and its branches. The organs were stored at 4 degrees Celsius for a period of less than 24 hours in the Anatomic Preparations Laboratory of the Health Sciences Sector of FURB.

Hearts with lesions due to trauma, those that had undergone heart surgery and those with scarring suggestive of myocardial infarction were not utilized.

The specimens were washed in running water until all blood clots had been removed from the cavities. After the excess of water had been removed, a polyurethane cannula was introduced into the aorta and tied using cotton thread (Sutupak®, Ethicon Inc., Sommerville, NJ, USA). A copolymer of liquid acrylic resin (Dencôr®, Clássico Ltda, São Paulo, SP, Brazil) at a proportion of 1:1 was poured into a container and Dencôr® resin polymerizer and aniline (Suvinil®, Basf, São Bernardo do Campo, SP, Brazil) were added and the contents were mixed thoroughly.

A three-way stopcock (Discofix®, B. Braun, São Gonçalo, RJ, Brazil) was connected to the side inlet of the polyurethane cannula. Additionally, a drip was connected to the cannula and to an aneroid manometer (Tycos®, 3M, NY, USA) thus allowing the measurement of pressure.

Using a 20 mL syringe, the prepared resin was instilled at a pressure of between 15 and 20 mmHg to uniformly fill the coronary arteries.

For 24 hours the heart was suspended in a water-filled container by cotton threads attached to the aortic arch without any contact with the sides of the container. Subsequently, the water was substituted by 10% hydrochloride acid for 24 hours or until all the heart tissue had been corroded.

After removing the organic remains, the branches of the coronary arteries were studied and the data listed in a table.

The Student t-test was utilized for statistical analysis to determine significant differences (α > 5%) between the types of coronary circulation dominance.

The hearts came from 17 male (68%) and 8 female (32%) cadavers with a mean age of 40.2 years old (range: 15 to 70 years). All the specimens had only two coronary arteries emerging from the aorta, and thus the presence of an accessory coronary artery was observed in none of the specimens nor was any coronary ostium absent (Figure 1). 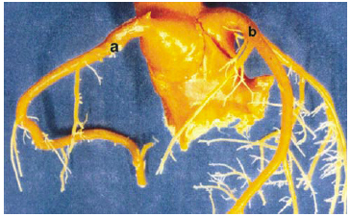 Right dominance, that is, the right coronary artery supplied the posterior interventricular branch, was observed in 18 molds (72%). The numbers of branches leading to the left ventricle were 1, 2, 3 and 4 in 1, 14, 2 and 1 molds, respectively. The mean number of branches was 2.16 and the median was 2. There were statistically significant differences between right and left dominance (α > 5%) and between right dominance and balanced circulation (α > 5% - Figure 2). 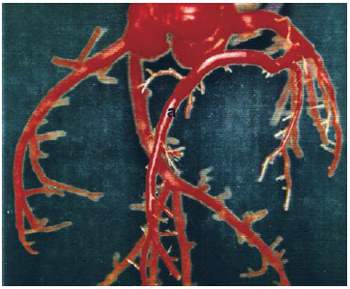 Left dominance, that is, the left coronary artery supplied the posterior interventricular branch, was observed in five (20%) specimens, with the following number of branches leading to the right ventricle: 1 branch in 4 specimens and 2 branches in 1 specimen. The mean number of branches was 1.2 and the median 1 branch. There was no statistically significant difference between left dominance and balanced circulation (α < 5% - Figure 3). 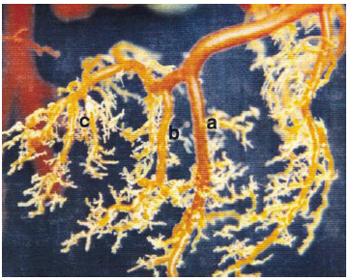 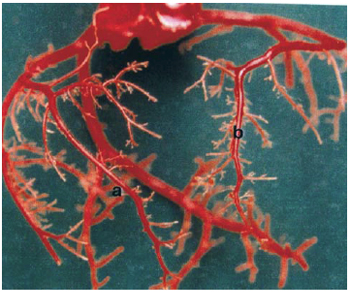 No anastomoses linking the two coronary systems were observed in any of the specimens using this method (Figure 5). 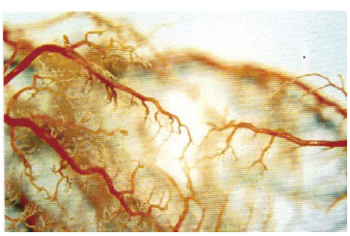 The study of the vascular anatomy can be achieved using different methods: simple dissection, dissection associated with filling of the vessels using latex resin, filling of the vessels with a polymerizing substance (vinylite, acrylic etc) with subsequent corrosion of the organ tissue using acidic solutions and angiographies. Dissection may not allow the visualization of small-diameter vessels and anastomoses, however the anatomic relationships are preserved and the branches and their destinations are easily determined. Polymerizing substances and angiographies may identify the anastomoses and small branches however the anatomic relationships are not directly identified, but are correlated by the direction of the vessels and characteristics of ramification. Thus there is no perfect method to analyze all characteristics.

Tsikaras et al. [7] believe that acrylic resins together with corrosion techniques are ideal for the production of anatomic molds because of the low cost, availability of materials, ease of manipulating the polymer and resin, fast setting (3 to 9 hours), the resistance of the molds, solubility of the dyes and the good visualization of small-caliber branches.

In this sample set, no abnormality of the root of the coronary arteries was found, contrary to the work by Angelini [8], who observed three cases in 125 hearts.

This study showed that the left coronary artery most frequently divides into 2 branches (23/25 hearts - 92%) similar to the findings of Benther et al. [9] who found trifurcation in only 10% of their specimens. Trifurcation of the branches occurs more commonly in Black individuals [10,11] and is believed that this characteristic is related to protection against ischemia.

The finding of 72% of right coronary artery dominance is similar to the incidence found by Didio & Wakefield [12], who observed right dominance in 73.5% of cases with the dissection of 98 hearts after the injection of gelatin with contrast. Ahmed et al. [13], using plastic resin in 94 heart samples, identified right dominance in 70.2% of the cases. An incidence of 90% has been described by other authors [14-16].

Left coronary artery dominance is reported in the literature in 10 to 12% of cases [15-17]. The result of 20% is again close to that reported by Didio & Wakefield [12] of 19.4%. By irrigating the anterior and posterior walls, this presentation may predispose individuals to mechanical complications of myocardial infarction in the course of occlusion of the left coronary artery.

On comparing 119 hearts with 150 coronary angiography films, balanced circulation was determined by Falci et al. [3] at 13% and 17% of the cases, respectively. The incidence of 8% of balanced circulation observed in our sample set is similar to that obtained by May [18] of 9%.

Baptista et al. [19] and Teixeira [20] considered that determination of the dominance by macroscopic vessels is limited. These authors reported that this study method does not take into account the complexity of the microcirculation and myocardial physiology. With this in mind, Vasko et al. [21] found a greater incidence of left dominance utilizing a method to assess myocardial tissue perfusion instead of using contrast. By perfusion, 69% of the hearts presented left dominance, 19% right dominance and 12% balanced circulation. The same hearts, when submitted to coronarography presented 48% of right dominance, with left dominance and balanced circulation being similar (approximately 26% each).

The method used did not allow the identification of collateral circulation between the arteries contrary to the study of Teixeira [20]. Ferreira et al. [4] observed a continuity of the anterior interventricular artery with its posterior equivalent in 76% of the cases. Benther et al. [9] found seven communications in 125 samples. Ahmed et al. [13] reported that it is not possible to determine whether the anastomoses found are functional because of the non-physiological conditions of the studies. Kyriakidis et al. [5] reported that there is an increase in the collateral vessels with age; collateral arteries are uncommon before the age of 50 years old. Ahmed et al. [13] found 73.4% of anastomoses, most commonly associated to right dominance.

Based on the results of this study: