CHARACTERIZATION OF THE PATIENT

The patient is a 42-year-old Caucasian man weighing 92 kg. His clinical history includes retrosternal discomfort and fatigue on average effort. He had been submitted to angioplasty in the previous year due to stable angina with the implantation of a non-drug-eluting stent in the anterior interventricular branch (AIVB). The patient did not report any other associated problems but was being prescribed aspirin and beta-blockers. At physical examination, the patient was ruddy, eupneic and without complaints. Auscultation demonstrated that the pleuropulmonary fields were free and heart auscultation showed sinusal rhythm with a fixed splitting of S2.

A chest x-ray showed an enlarged heart affecting the right ventricle (RV). An echocardiogram showed that the size of the left atrium (LA) was normal (4.0 cm) and the left ventricle (LV) had a normal cavity diameter (systolic diameter of LV: 2.70 cm - diastolic diameter of LV: 5.0 cm) and normal myocardial thickness. The RV was enlarged (diastolic diameter of RV: 4.1 cm) and the pulmonary artery was slightly dilated (2.6 cm). The ejection fraction was estimated at 77%. The tricuspid valve presented with functional reflux and the pressure of the pulmonary artery was estimated at 40 mmHg. Note the change in the interatrial septum due to the presence of an ostium secundum-type interatrial communication (IAC) measuring about 2.5 cm at its greatest diameter and with Qp/Qs estimated at 1.9.

For the preoperative preparation, a cardiac catheterism was requested without puncturing the femoral vessels due to the possibility of video-assisted minimally invasive surgery. The coronary circulation had a single-artery obstruction due to the total occlusion of the AIVB at the site of the implanted stent. A left ventriculography identified an increase in the final systolic volume due to moderate anteroapical hypokinesia. After discussion of the clinical case, surgery to correct the IAC and revascularization of the anterior interventricular artery was chosen. During discussions about the techniques available to concomitantly repair these alterations, the patient chose video-assisted minimally invasive surgery.

The surgery consisted in occlusion of the IAC using a bovine pericardial patch and coronary artery bypass grafting (CABG) utilizing the left thoracic artery (LITA) anastomosed to the AIVB. Thus, the transareolar video-assisted minimally invasive approach [1,2] was chosen to correct the IAC and left anterior minithoracotomy for CABG [3]. The time of cardiopulmonary bypass (CPB) was 62 minutes and of aortic clamping it was 38 minutes.

The patient had a good uneventful postoperative evolution. At echocardiography on the 4th postoperative day on discharge, the interatrial septum was intact and the ventricular function was within the normal range. The mechanical ventilation time was 6.5 hours, postoperative bleeding was 400 mL and the time in the ICU was 25 hours.


DESCRIPTION OF THE OPERATIVE TECHNIQUE

The patient was intubated utilizing a Carlens orotracheal tube for selective pulmonary ventilation and positioned with the right side of the chest elevated at 20º and with the arm along the table. Disposable heart defibrillation pads were placed in the right scapula region and the lateral region of the left hemithorax. A nasopharyngeal thermometer and a transesophageal echocardiography transducer were inserted. Initially, the marks for surgical access were made using a surgical pen (Figure 1). Subsequently a sterile adhesive film (Opsite®) was applied to all the exposed area. For venous drainage the right internal jugular vein was punctured and cannulated after systemic heparization. The left lung was selected and a 5-mm trocar was introduced in the 4th left intercostal space (LICS) on the anterior axillary line for videothoracoscopy. The chest cavity was inspected but it was impossible to see the LITA due to a large amount of adipose tissue adhered to the parietal pleura. An incision was made in the skin in the 4th LICS along the markings on the left hemithorax (6 cm); the left major pectoral muscle was sectioned and the intercostal space opened. A retractor for minithoracotomy was introduced and extreme care was taken to initially identify the satellite vein of the LITA, which signals the closeness of the LITA, which was proximally dissected as far as the left subclavian vein and, distally up to the 6th LICS. Ventilation of the left lung was restarted. 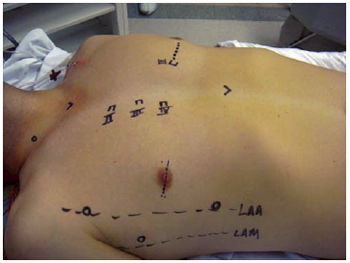 Following this, an incision was made in the right nipple areola complex, dividing it horizontally in two equal parts. After sectioning the skin, when the loose connective tissue was reached, electric cauterization was utilized for hemostasis, the right major pectoral muscle was sectioned and access to the 4th right intercostal space (RICS) was attained.

The right hemithorax was approached through the 4th RICS [4] between the anterior axillary line (AAL) and the right midclavicular line (RMCL). To increase the working area, Alexis® (Applied Medical) soft tissue retractors were employed. The right lung was selected. A 5-mm 30º trocar for a viewing scope was introduced into the same intercostal space anterior to the midaxillary line and a 7-mm trocar was introduced in the 7th RICS on the AAL for CO2 insufflation together with the opening for the atrial malleable suction probe (DLP® Medtronic, Inc.). The surgical instruments, specific for this type of procedure, consisted of transthoracic aortic clamps, forceps, needle holders and long scissors of approximately 35 cm for videothoracoscopy. Using the viewing scope, the pericardium was opened two centimeters below the phrenic nerve. This incision extended from the inferior to the superior vena cavae. The pericardium was retracted using four stitches which were exteriorized, through the thoracic wall utilizing a punch and hook.

After systemic heparinization, cardiopulmonary bypass (CPB) was established by cannulation of the femoral vessels, with the skin being incised at the right inguinal groove and the femoral vessels cannulated using the Seldinger technique under direct vision. A Bio-medicus® n° 19 Fr cannula (Medtronic, Inc.) was utilized for arterial cannulization and an Eopa n° 21 Fr femoral cannula (Medtronic, Inc) was used for the venous line. The right internal jugular vein was concomitantly cannulated utilizing an Edwards Lifesciences nº 16 Fr arterial cannula. The venous drain was vacuum-assisted. The patient was maintained at 28ºC. Transesophageal echocardiography was employed to correctly position the cannulae.

A transthoracic aortic clamp (Chitwood clamp - Fehling, Inc) was introduced through the 2nd RICS on the AAL. By videothoracoscopy, the ascending aorta was clamped and punctured using a 30-cm metal needle (Geister, Inc.) in order to administer hypothermal anterograde cardioplegia (6ºC) in HTK solution (Custodiol®). A purse-string stitch was made at the site of the puncture using 2-0 platted polyester thread with Teflon as a tourniquet for future de-airing of the ascending aorta. Both of the vena cavae were clamped using bulldog clips (Aesculap, Inc.) for videolaparoscope procedures (Figure 2). The right atrium was opened between the inferior vena cava and the right atrial appendix. Atrial retraction was achieved using a specific transthoracic retractor (Geister, Inc.) passing through the 4th RICS, to the side of the right internal thoracic artery region. 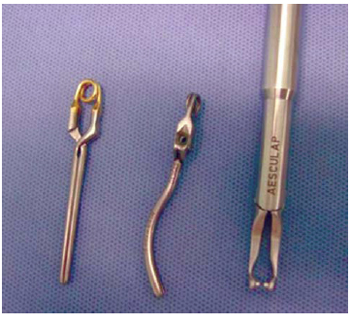 With the introduction of the viewing scope in the right atrium, the tricuspid valve, the coronary sinus and the IAC were inspected. A pericardial bovine patch was used to occlude the IAC using a continuous 4-0 polypropylene suture (Figure 3). The lungs were insufflated with the objective of de-airing the left chambers moments before completing the suturing of the bovine pericardial patch. The right atrium was closed on two planes with a continuous 4-0 polypropylene suture and the bulldog clips were removed. Gradual re-warming of the patient was performed. 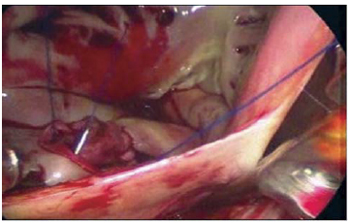 Subsequently myocardial revascularization was started. The LITA was sectioned, the pericardial sac was opened anterior to the phrenic nerve and externally drawn using four 2-0 silk threads on needles. The AIVB was identified and exposed using two 2-0 silk stitches. The arteriotomy was performed, as was the anastomosis between the LITA and the AIVB using a continuous 7-0 polypropylene suture (Figure 4). 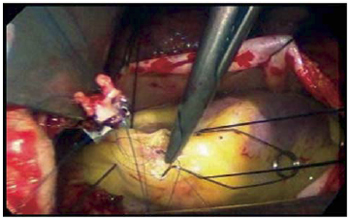 An injection of 3 liters per minute of CO2 was maintained while the pericardial sac was open in order to reduce the possibility of air embolism. De-airing maneuvers of the left chambers were performed by setting the operating table in Trendelenburg and anti-Trendelenburg positions and alternating the left and right sides. The tourniquet at the site of the puncture of the ascending aorta for cardioplegia was opened so that the remaining air in the ascending aorta could be evacuated. The left cavities were inspected by transesophageal echocardiography and as there were no residual air bubbles, the aorta was declamped.

After weaning from CPB, another transesophageal echocardiogram was taken demonstrating complete closure of the IVC without any residual shunt. The femoral vessels and the right internal jugular vein were de-cannulated and the heparin reversed. After checking the hemostasis, the pericardium was closed using individual 2-0 braided polyester sutures. The thoracic drain was exteriorized through the orifice of the trocar of the right atrium suction probe and placed inside the pericardial sac. The left thoracic drain was exteriorized by the orifice of the thoracoscopy trocar. The drains were maintained at a negative pressure of 20 mmHgH2O.

The transareolar access was closed by planes; initially the ribs were brought together using two nº 5 braided polyester stitches. The muscle and subcutaneous planes were reconstructed with 3-0 poliglecaprone 25 (Caprofyl®). Suturing of the subdermal was achieved with 4-0 colorless polyglycolic acid PGA thread (Monocryl®) with a reverse cutting needle. The central portions of the edges of the nipple-areola complex and of the skin were utilized as the initial reference point and from this the suturing of the subdermal plane was completed with equidistant stitches.

We achieved good coaptation of the edges of the operative wound, the synthesis of the skin was achieved with simple 5-0 mononylon sutures. The surgical access to the left hemithorax was closed by planes similar to the closure of the transareolar access except that suturing of the skin was by a continuous intradermal stitch of 4-0 colorless polyglycolic acid PGA thread (Monocryl ®) with a reverse cutting needle (Figure 4). The right inguinal groove incision was closed by planes and the skin closed using a continuous stitch of 4-0 colorless polyglycolic acid PGA thread (Monocryl®). The other openings were closed using simple 5-0 nylon sutures. The dressings were prepared using micropore®.

There is no conflict of interest