OBJECTIVE: The aim of the present study was to identify risk factors for acute renal failure in patients with normal levels of serum creatinine who had undergone coronary artery bypass graft (CABG) surgery and/or valve surgery. METHODS: Data from a cohort of 769 patients were assessed using bivariate analyses and binary logistic regression modeling. RESULTS: Three hundred eighty one patients underwent CABG, 339 valve surgery and 49 had undergone both simultaneously. Forty six percent of the patients were female and the mean age was 57 ± 14 years (13 to 89 years). Seventy eight (10%) patients presented renal dysfunction postoperatively, of these 23% needed hemodialysis (2.4% of all patients). The mortality for the whole cohort was 10%. The overall mortality for patients experiencing postoperative renal dysfunction was 40% (versus 7%, P < 0.001), 29% for those who did not need dialysis and 67% for those who needed dialysis (P = 0.004). The independent risk factors found were: age (P < 0.000, OR: 1.056), congestive heart failure (P = 0.091, OR: 2.238), COPD (P = 0.003, OR: 4.111), endocarditis (P = 0.001, OR: 12.140), myocardial infarction < 30 days (P = 0.015, OR: 4.205), valve surgery (P = 0.016, OR: 2.137), cardiopulmonary bypass time > 120 min (P = 0.001, OR: 7.040), peripheral arterial vascular disease (P = 0.107, 2.296). CONCLUSION: Renal dysfunction was the most frequent postoperative organ dysfunction in patients undergone CABG and/or valve surgery and age, congestive heart failure, COPD, endocarditis, myocardial infarction < 30 days, valve surgery, cardiopulmonary bypass time >120 min, and peripheral arterial vascular disease were the risk factors independently associated with acute renal failure (ARF).

Acute kidney injury (AKI) is a prevalent and prognostically important complication of cardiac surgery [1]. When the injury is severe enough to necessitate dialysis, it may confer a pronounced increase in the odds of death [2], and even less severe injury may be associated with markedly increased morbidity and mortality [3]. The ability of preoperatively identify patients at risk for AKI may present the opportunity for making use of preventive strategies to mitigate the risk [4]. Therefore, the aim of the present investigation is to identify perioperative risk factors for perioperative AKI resulting in postoperative renal dysfunction in patients without clinical evidence of preoperative renal dysfunction who had undergone valve heart surgery and/or coronary artery bypass graft surgery (CABG).

Data from a prospectively collected database were used for the present study. The initial cohort consisted of 924 patients > 12 year, independently of race or gender, who had undergone valve heart surgery and/or CABG with cardiopulmonary bypass (CPB) at the Clinics Hospital at Ribeirão Preto Medical School of University of São Paulo between January 2003 and July 2009. Exclusion criteria for the present study were preoperative serum creatinine > 1.5 mg/dl or < 0.7 mg/dl, preoperative dialysis, preoperative known renal disease, preoperative urinary infection, any cardiac operation performed without cardiopulmonary bypass, any other cardiac procedure besides heart valve surgery and/or CABG surgery. For patients who underwent more than 1 relevant procedure during the study period, only data on their initial surgery were collected. All the patients had their serum creatinine assessed within 30 days before surgery. If there is more than one assessment within 30 days, the most recent was used independently of its value. In our hospital the normal range for serum creatinine is between 0.7 and 1.5 mg/dl.

Postoperative acute kidney injury was defined as an increase of at least 50% in preoperative serum creatinine value independently if postoperative dialysis was or was not needed. After research board approval of our hospital was received, detailed perioperative data were analyzed retrospectively.

The primary dependent variable was postoperative AKI, as defined above. Measurements of preoperative and intraoperative variables known to be or that could potentially be associated with AKI (independent variables) were examined. Patients with systolic pulmonary artery pressure > 40 mmHg were classified as having hypertension and patients with myocardial infarction were divided into infarction patients with less or more than 30 days. Any patient with a previous diagnosis of diabetes mellitus in nutritional or medical treatment or any patient with fasting glucose above 110 mg/dl was considered as suffering diabetes mellitus. It was considered as a victim of stroke, any patient with a definite diagnosis by neurological evaluation, regardless of whether or not neurological sequelae. The definition of the other independent variables was defined according the EuroSCORE [5].

Categorical variables were summarized as frequencies and percentages and continuous variables as means and standard deviations. To compare more than 2 groups ANOVA plus Games-Howell post hoc test was used. The unadjusted association of the preoperative and intraoperative variables with AKI rates was calculated (with the Mann-Whitnney test and the X2 statistic). Binary logistic regression modeling was also performed to assess the adjusted associations of measured perioperative variables with the postoperative AKI. Initially, bivariate analyses (using the X 2 statistic for categorical variables and Mann-Whitney test for continuous variables) were performed to identify which variables were associated with the dependent variables. The linearity relationship between the continuous predictor variables and AKI was assessed with Box-Tidwell transformation [6]. Variables that were not linearly related were categorized along clinically sensible cut points. All clinically sensible variables with P< 0.3 in the bivariate analyses were entered into logistic regression models. Subsequent retention in the models was determined by backward stepwise selection, in which P< 0.15 was the criterion for variable retention. Collinearity statistics (tolerance and variance-inflation factor) was performed to identify collinear independent variables. Model discrimination and calibration were assessed by the c-index and the Hosmer-Lemeshow statistic (larger probability value means better calibration), respectively. SPSS version 16.0 (SPSS, Inc, Chicago, IL, USA) was used for the statistical analyses.

After the exclusion criteria were applied, 769 patients were included in the study. Three hundred eighty one patients underwent CABG, 339 underwent valve surgery and 49 underwent both simultaneously. Demographic and operative data are shown in Table 1. Forty three percent of the patients who underwent valve operation needed mitral replacement, 13% mitral valve repair, 30% aortic valve replacement and 7% had mitral and aortic valve replacement. Among those who underwent CABG surgery the number of distal anastomosis was 2.9±0.9. Patients who underwent isolated valve operation were younger (51±15 years versus 62±10 years, P< 0.001), had worst functional class (52% was in Class III/IV versus 8%, P< 0,001) and needed longer CPB time (113±50 min. versus 97±52 min., P< 0.001) than those who underwent isolated CABG. The CPB time was even longer in patients needing combined operation compared with isolated CABG or valve surgery (153±62 min, ANOVA plus Games-Howell post hoc test). 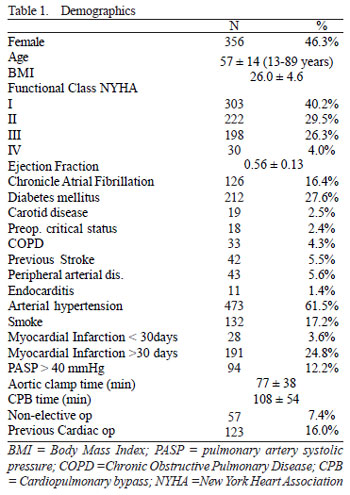 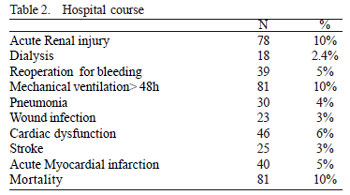 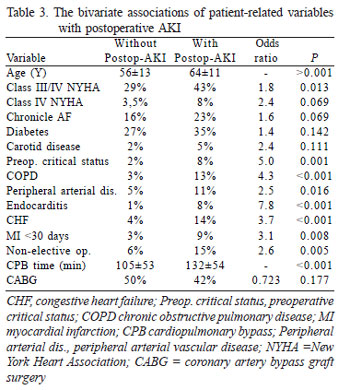 In the present study renal dysfunction was the most frequent organ dysfunction occurring postoperatively, since the need for prolonged mechanical ventilation, equally frequent, was also related to others organic dysfunction besides lung injury. We have identified several preoperative risk factors for AKI, most of them directly or indirectly related to poor hemodynamic status and/or arterial disease, such as peripheral arterial disease, carotid artery disease and myocardial infarction, similarly to other investigators [7-12]. However, in our cohort, CABG surgery alone was not an independent factor associated with postoperative AKI, contrarily to valve surgery, even though coronary artery disease is intimately associated with older age, diabetes mellitus, COPD and peripheral atherosclerosis. The finding that valve operation is a risk factor for AKI is not surprising, and it may be explained due the fact of valve dysfunction, in spite of affecting younger patients in our country, requires a more complex intracardiac operation, usually involving mitral reconstruction or replacement. In addition, usually valve operations demand longer CPB times, an independent risk factor for AKI, and frequently are performed in patients with hemodynamic status more compromised than those with isolated coronary disease, as we have demonstrated.

Among several causes of AKI after cardiac surgery one of the most important is cellular ischemia [15], since blood pressure during cardiac surgery is often at the lower limits or even below the limits of autoregulation of the blood flow. In addition, many cardiac surgery patients may have impaired autoregulation of kidney blood flow due perioperative administration of medications. Also, systemic inflammation provoked by the cardiopulmonary bypass plays a preponderant role in the development of kidney injury by promoting proinflammatory events that amplify the operative trauma [16], and certainly microemboli during cardiopulmonary bypass is also an important factor.

In the present study the number of patients who underwent CABG surgery in combination with valve surgery represented less than 7% of the cohort, compromising its collaboration in the developed model. However, our intention was not to develop a model for precise prediction of AKI, since we believe our sample size was not ideal for this purpose. Our main concern was to find preoperative variables that may be associated with AKI and identify those suitable for prophylactic intervention. However, in spite of the efforts, it seems there is a the lack of progress in preventing AKI and its consequences after cardiac surgery [4] that may be related to the difficulties with the proper definition of AKI and the initiation and timing of dialysis [17, 18]. Nonetheless, some preoperative and intraoperative preventive actions may help to prevent the postoperative renal dysfunction. Postponing the operation to improve the hemodynamic situation [19], stopping medications, such as angiotensin-converting enzyme inhibitors/angiotensin receptor blockers, shortly before the operation [20], planning the surgical strategy to shorten the cardiopulmonary bypass time, and a tight perioperative glucose control [21] may help to reduce the incidence of postoperative renal dysfunction. N-acetylcysteine, B-type natriuretic peptide and other drugs have been proposed to reduce postoperative AKI or improve the renal function, however their use has been controversial [4]. Although it is obvious that intraoperative and postoperative adverse events may contribute to the occurrence of postoperative renal dysfunction, many of them are not predictable, and therefore their use for preoperative risk stratification of AKI may be limited.

There are limitations to this study. We believe that our sample size was not large enough to develop a highly accurate model to stratify renal risk, and ideally our results should be validated using an external sample. Other important preoperative variables, such as medications in use and the condition of other organic functions - like the hepatic, hematopoietic and haemostatic functions - should be of concern, mainly in patients who have already presented preoperative renal dysfunction and/or has been enduring congestive heart failure for long time. In addition, the variables associated with postoperative AKI, as well as their value, may be different according to the preoperative baseline renal function [9,22]. However, the cost-effectiveness and practicality of a more accurate preoperative evaluation of the renal and other organic function must be considered before becoming routinely used.