Since I took over the post of Editor of the Brazilian Journal of Cardiovascular Surgery (BJCVS) in 2002, I have tried to implement changes in order to match the publication to the best ones around the world. Despite the natural difficulties, efforts were crowned with the indexing in PubMed/Medline in 2007 and ISI-Thomson in 2009.

As I wrote in this space previously, the indexations do not represent an end but a beginning, because in order to remain indexed we need to maintain the level of content and graphic. So the news does not stop!

Our website (www.rbccv.org.br) has been undergoing constant updates in order to streamline the review process. Recently, the deadline for review of the manuscripts was reduced from 20 to 10 days, and it was established that those returned to authors for correction with no return within 70 days will be automatically excluded from the system. The measures aim to provide greater agility and to streamline the flow. Although advances have occurred, the time delay between submission and publication of the paper is still higher than desirable in most cases. Therefore, I ask once again, that authors and reviewers to adhere strictly to the prescribed period. Everybody will win.

We are also making efforts to streamline the release of the online edition in English version, with the use of more translators and reduced deadline.

Now, our main objective is to increase the Impact Factor (IF) of BJCVS, regardless of the discord raised with the reclassification of Brazilian journals by CAPES, which is still being contested (see Editorial on Page III). The number of citations of BJCVS has grown these past two years. In SCOPUS, we can observe a considerable increase from 2006 to 2009, reaching 0.038 (Fig. 1). It is still far from ideal, but certainly the numbers should be even more significant with the indexing in ISI. 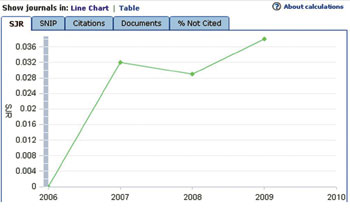 Fig. 1 - Graphic showing the increase of the number of citations of BJCVS in the database Scopus between 2006 e 2009

But there are still more citations, the level of the articles should be even better. And one way to accomplish this is to be rigorous in the reviews. The Norms of BJCVS are quite clear regarding the structure of the articles and also approach how the content should be worked. Even so, we will improve them so that they are clearer to authors and reviewers with regard to the content that the journal expects to have, just as other periodicals do.

Mayo Clinic, for example, has a series of instructions so that a manuscript can be accepted. The Case Reports, for example, to be accepted, should be written from a non-expected or unusual fact in a process of a known disease or new disease, new syndrome, known and important manifestation of a common disease; new insight into the pathophysiology of a common disease, first or new observation of an important side effect of drug often used, new therapeutic activity of new treatment, including therapies with or without use of drugs.

Reviewers should note whether the explanation provided by the authors to the cause and effect relationship (pathogenesis) is plausible; if the experience, which may be a new treatment, may stimulate more clinical researches; if the knowledge of the event could affect the treatment of other physicians to patients in similar circumstances.

Of course in BJCVS, being predominantly a surgical journal, other aspects must be addressed, but the above example shows the importance to be guided by a minimum directing so that the work is within the criteria for publication. As always, suggestions are welcome.

I would like to congratulate the new Board, chaired by Dr. Walter Gomes, who will control the destinies of the Brazilian Society of Cardiovascular Surgery (BSCCV) in the biennium 2011-2012. For the first time, the election was conducted via the Internet, in a democratic and agile process. I congratulate also the slate that had as president Dr. Fernando Fantini, who greatly appreciated the dispute. After the electoral process, the time is to unite in order to enhance the Brazilian cardiovascular surgeon.

Much of what has been achieved is due to the perseverance of the current president, Dr. Gilberto Barbosa, who spared no efforts to meet various demands and sought to bring the BSCVS close to other international societies. The results could be seen on the 37th Brazilian Congress of Cardiovascular Surgery, held 25-27 March in Belém. News were presented, such as the Hand On and Techno-College. The record number of participants (958) attested to the importance and success of the event.

The award for Professional of the Year was awarded to the manager of BSCVS, Dr. Meryt Zanini, for the brilliant services rendered to the Society over the years.

In this issue we have five more items available for testing by the system of Continuing Medical Education (CME): "Risk score elaboration for mediastinitis after coronary artery bypass grafting" on page 154, "Quality of service provided to heart surgery patients of the Single Health System-SUS", on page 160; "Outcomes after coronary artery bypass in aged patients" on page 172, "Correlation between right atrial venous blood gasometry and cardiac index in cardiac surgery postoperative", on page 190, and "Ventilatory function and physical function perioperatives variables in heart transplantation" on page 229.