Objective: Atrial fibrillation (AF) is a common complication following cardiac surgery and is associated with an increased patient morbidity and mortality. The objective of this study was to develop a risk index proposal to predict AF after cardiac surgery. Methods: A prospective observational study in that 452 patients were selected to assess the incidence and risk factors associated with postoperative AF. Only patients following cardiac surgery were selected. Continuous cardiac monitor and daily electrocardiogram were assessed. The most associated in a multivariable logistic model were selected for the risk index. Results: The average incidence of AF was 22.1%. The most associated factors with AF were: patients older than 75 years of age, mitral valve disease, no use of a beta blocker, withdrawal of a beta-blocker and a positive fluid balance. The absence risk factor determined 4.6% chance to postoperative AF, and for one, two and three or more risk factors, the chance was 16.6%, 25.9% and 46.3%, respectively. Conclusion: In a multivariable logistic model was possible to develop a risk index proposal to predict postoperative AF with a major risk of 46.3% in the presence of three or more risk factors.

Atrial fibrillation (AF) is the most common arrhythmia in adults. This disease is initiated by a rapid electrical activity localized in an outbreak of the atrial myocardium and sustained by reentrant circuits. These circuits appear and disappear at different times and places in the atrium, leading to an arrhythmic contraction and thus decreasing the atrial contractility, which predisposes the atrium to new reentrant circuits[1-3]. Foci of rapid ectopic activity, often located in the region extending from the left atrium to the pulmonary veins are related to the onset of AF episodes in humans[4,5]. The proposed mechanisms are: increased automaticity, trigger activity, micro-reentry and changes in sympathetic tone[4]. The atria of patients with AF show structural abnormalities[6,7]. Histologic examination shows areas of fibrosis with juxtaposition of normal and diseased atrial fibers, which contribute to the heterogeneity of atrial refractoriness[8]. Fibrosis is an important component of the pathophysiology of AF, particularly when this arrhythmia is associated with heart failure or atrial dilatation[4].

The postoperative arrhythmias have a multifactorial etiology, but originate mainly from an incomplete myocardial protection. Oxygen-derived free radicals and calcium overload resulting from ischemia reperfusion are important arrhythmogenesis mechanisms that lead to transmural reentry[9].

Several prophylactic measures for the onset of postoperative AF are reported in the literature, including the use of magnesium, amiodarone, digoxin, steroids and beta blockers, the latter being of greater viability and effectiveness[14].

In addition to expanding costs, readmissions and prolongation of hospital stay, AF leads to a worsened prognosis of the patient, resulting in increased morbidity and mortality [10-13]. The high incidence of AF in the postoperative of cardiac surgery points to the importance of identifying patients at high risk for developing this arrhythmia. The benefit of preventive and therapeutic measures have been proposed for the study of the genesis of AF in the postoperative period. Thus, this study aimed to develop a proposal for a risk score for the incidence of AF after cardiac surgery.

The present study consists of a prospective, observational analysis, in which 448 patients were enrolled at the Institute of Cardiology/University Foundation of Cardiology of Rio Grande do Sul (IC-FUC).

We selected adult patients undergoing CABG or valve surgery with or without cardiopulmonary bypass. Patients with AF or with history of paroxysmal or permanent AF preoperatively were excluded. Patients were selected during the immediate postoperative period in the Postoperative Unit Number I (POU I) of the IC-FUC. This study included analysis of a sample of patients obtained in two separate years.

Patients were selected systematically. The sample included all patients undergoing cardiac surgery on a given weekday, and in each week the day of selection was different, consecutively, from Monday to Friday. All patients enrolled in the study were followed until the day of hospital discharge.

Assessment of each patient was divided into four phases: immediate postoperative phase, intensive care unit (ICU) postoperative (POU I and II), post-ICU (nursing beds) and day of discharge from hospital. In each of the four phases, we used a protocol previously approved by the Research Ethics Committee of the IC-FUC in which there were the data to be searched.

All patients who met the inclusion criteria signed a written informed consent approved by the Research Ethics Committee of the IC-FUC. Failure to sign the informed consent resulted in the exclusion of the patient. In the selection phase, the demographics and preoperative data have been chosen for survey.

Cardiac rhythm was assessed by continuous cardiac monitoring in all patients for a minimum of 72 hours (postoperative ICU) and by daily electrocardiographic examinations until hospital discharge.

It was considered AF any episode of supraventricular arrhythmia whose electrocardiographic tracing showed "f" waves of variable morphology and amplitude, with irregular ventricular rhythm. There were considered for the study episodes of AF lasting at least 15 minutes or requiring treatment due to symptoms or hemodynamic instability.

During the selection and analysis of the patients, there was the implementation of a protocol for prevention of AF after cardiac surgery. This protocol was implemented by the establishment of an independent and not linked manner to this study. Thus, it became necessary to compare clinical and demographic data between patients by Student's t test for independent samples.

This study included the screening of 448 patients over a period of two years. Patients selected before and after implementation of routines for prevention of AF were, respectively, 145 and 303 individuals. Faced with the comparison of clinical and demographic characteristics, no statistically significant differences at baseline were found. So, as a single sample, the average age was 61 years (sd+12), being 25% over 70 years. Males constituted 64% of the sample.

Univariate analysis of the derivation cohort showed that significant risk factors for AP were: age over 70 years, diabetes, mitral and aortic valve disease, dyspnea, dyslipidemia, left heart failure (LHF), beta-blockers discontinued and increased total fluid balance. These variables were defined by clinical, laboratory and radiographic findings, according to the literature. Only the use of beta-blockers or not was considered (Table 1).

Among all risk factors mentioned above, which showed strong association in multivariate logistic regression with postoperative AF, according to their clinical relevance were: age over 70 years, mitral valve disease, the use or discontinuation of beta-blockers and fluid balance above 1500 ml. These factors were used for composition of the risk score for prediction of AF (Table 2).

The proposed risk score is shown in Figure 1 in graph form, where it can be observed the increasing line of risk in relation to the increased number of associated factors (Figure 1). 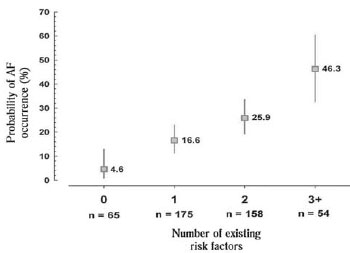 Fig. 1 - Increased risk (expressed in%) for the occurrence of postoperative AF in accordance with the number of risk factors present. The bars represent the confidence interval of 95% (P < 0.001)

During the development of this proposal of risk score, this study examined patients in the postoperative period of cardiac surgery. Some studies have sought to establish the main factors associated with postoperative AF.

This study showed that age above 70 years is strongly associated with AF in the postoperative period of cardiac surgery (P < 0.001). Among the patients over 70 years, 33.1% developed AF during the hospital stay. The model of Zaman et al.[17] sought to highlight the preoperative risk of AF after CABG. This study used age above 60 years, enlarged P wave (greater than 155ms, suggesting atrial overload) and male gender as risk factors. Patients with three risk factors were considered at high risk for developing postoperative AF. Mathew et al.[18] in a prospective and multicenter study, also developed an index for risk of atrial fibrillation after cardiac surgery, in which factors considered independently associated with postoperative AF were age, previous history of AF, valve surgery, chronic obstructive pulmonary disease and discontinuation of beta blockers or angiotensin converting enzyme 1.

Literature reports any patient over 70 years as high-risk patient for developing AF. In addition, it is also known that every 10 years of patient's age, the risk of postoperative AF increased 75%[17,19]. Advanced age is associated with changes in connective tissue and atrial dilatation, and may cause changes in electrical conduction and thereby also increasing the chance of FA. Most of these patients suffer from hypertension and left ventricular hypertrophy, which further predispose the atrium to the development of AF[19]. However, it is not possible to relate the high association of AF in elderly patients only with cardiac surgery, and some authors have shown that the incidence of AF in elderly patients is also high in postoperative of non-cardiac surgery in populations not undergoing surgery[20,21]. Previous studies, in agreement with the study presented herein, demonstrate the advanced age as a factor of extreme importance for the development of postoperative AF.

Our study has shown that among all patients who discontinued use of beta-blockers, 32.1% had AF, which is a significant risk factor (P=0.008). Although it is considered a multifactorial etiology, the postoperative AF can be initiated after an exaggerated response to adrenergic stimulation due to incomplete myocardial protection, without the use of beta-blockers in the immediate postoperative period.

Another risk factor used in preparing this proposed risk score was the mitral valve disease, significant in multivariate logistic regression (P=0.022). In a cross-sectional study and in accordance with the findings of this study, Almassi et al.[10] observed that the surgical repair (OR 1.42 and P < 0.0001) and replacement (OR 2.33 and P < 0.001) of the mitral valve had a higher association with AF after cardiac surgery between variables intraoperatively[11]. These surgeries generally require bicaval cannulation and a long duration of cardiopulmonary bypass and aortic clamping. Although the ischemic time and cardiopulmonary bypass did not contribute significantly to the occurrence of AF in this study, other studies have shown that bicaval cannulation and cardiopulmonary bypass time increase the risk of postoperative AF[25,26]. These factors may create a bias and interfering with the role of surgery as an isolated factor in the development of postoperative AF.

The sum of factors for AF in the multivariate analysis of this study does not cover all risk factors for postoperative AF. Probably this is because the sample was insufficient and because other risk factors that are demonstrably linked to the incidence of postoperative atrial fibrillation, such as inflammation and activation of the renin-angiotensin-aldosterone system, male gender, hypertension, chronic obstructive pulmonary disease, coronary stenosis and need for mechanical ventilation support, had not been analyzed in the derivation cohort[14,27-29]. We believe that this was a major limitation of this study, but this does not prevent its validation in another population undergoing cardiac surgery.

Some studies have shown the effectiveness in the implementation of pharmacological measures to prevent AF after cardiac surgery[22,30,31]. It is believed that a risk score for the incidence of AF may guide the conduct of clinical and surgical approaches, indicating the best candidate to receive these measures.

As presented herein, we can conclude that, through a multivariate logistic regression model, it was possible to develop a propose of risk score for AF after cardiac surgery, thus enabling the identification of risk patients and the development of conduct and protocols for prophylaxis of AF in these situations. It is believed that this model can also provide an appropriate scientific basis if it is demonstrated in the validation cohort.