Prosthetic graft infection is a serious complication of abdominal aorta surgery. Its removal is always indicated because it prevents potential significant complications, but reconstruction is a technical challenge. The authors present a case of an in situ reconstruction with corrugated bovine pericardial tubular graft.
INTRODUCTION

Infrarenal aortic graft infection continues to be one of the most challenging problems in modern vascular surgery. Infection associated with bioprosthetic material can occur in up to 3% of implanted materials [1].

Successful treatment necessitates the complete excision of the infrarenal aortic graft infection with the maintenance of adequate lower extremity arterial inflow. Patient survival, freedom from recurrent infection, patency of the revascularization, and avoidance of major amputation are important outcome goals used to measure the success of surgical treatment.

Glutaraldehyde-treated bovine pericardial grafts have been used in cardiovascular surgery for aorta replacement. Long term follow-up demonstrated low complication rate, including infections, thrombosis and bleeding [2,3]. However, its use in human abdominal aorta graft replacement has not been used. The objective of this article is to report an abdominal aortic graft infection successfully treated by a bovine pericardial tubular graft.

A 51 year old male was admitted to the hospital with shock due to diabetic ketoacidosis. He had history of alcohol abuse, hypertension, tabacoo use and diabetes mellitus type 2. Four years before admission he had undergone an aortobifemoral bypass for an enlarging 5.5 cm abdominal aortic aneurysm (AAA).

Diagnosis of septic arthritis of multiple joints was done. Due to a suspected infection of the aortobifemoral graft as source of emboli, a CT scan was performed and it showed two fluid collections; the first located around the proximal part of aortic graft and the second around the left leg of the bifurcated graft (Figure 1). CT-guided percutaneous pigtail tube placement and collection drainage was performed. 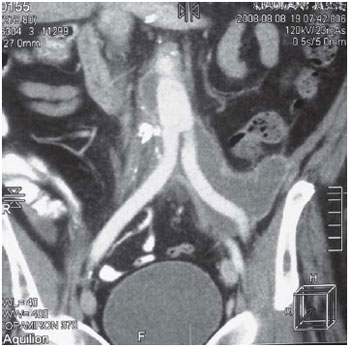 Fig.1 - Preoperative CT scan shows two fluid collections; the first located around the proximal part of aortic graft and the second around the left leg of the bifurcated graft

Exploratory left lumbotomy was done and we certified the communication between the collection and the aortic and left leg limb of the aortobifemoral graft. Culture of percutaneous and surgical samples yielded growth with Stenotrophomona Maltophilia, that microorganism was interpreted as probable contaminant, but it was treated just in case because of high risk of an undertreated prosthetic graft infection. Antibiotic treatment shifted to amoxicillin-clavulanic acid, levofloxacin and sulfamethoxazole/trimethoprim intravenously due to sensibility of both microorganisms.

We decided to do in situ bypass with biological material. In our homograft bank we did not have an aorto-iliac-femoral homograft with enough length to do correct reconstruction, so we request five straight corrugated bovine pericardial tubular graft (Braile BiomedicaT, Sao Paulo, Brazil), one of 21 by 100 mm and four of 11 by 100 mm in order to do in situ bypass with biological graft. Patient gave informed consent and was advised of pro and cons of the procedure. Until surgery, patient did well without fever and good glycemic controls. Follow-up CT scan did not show any collection. Patient was followed as out patient with IV antibiotics. 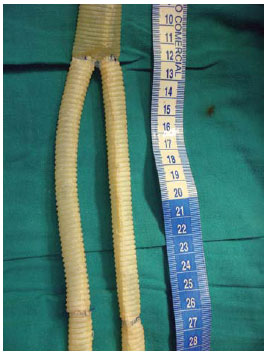 Fig. 2 - Horizontal mattress stitch in the middle of the main body corrugated bovine pericardial tubular graft to make two sides. To each orifice we sutured end to end two limbs 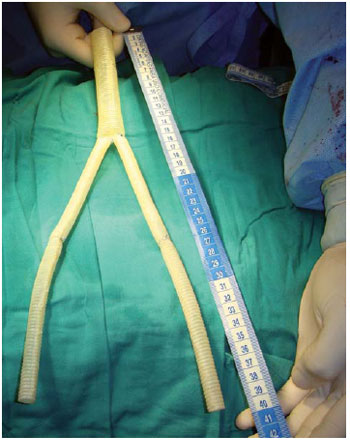 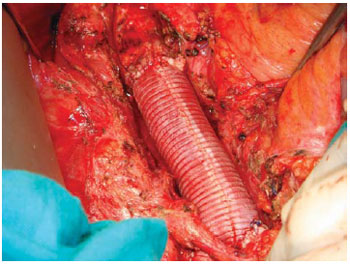 Patient recovery was uneventfully and was discharged on postoperative day 5 with oral antibiotics for 6 months. Control CT scan four months after surgery did not reveal any collection or complication (Figure 5). 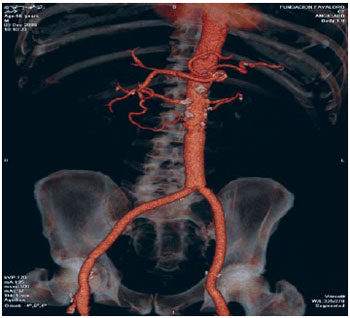 Infected aortic prosthetic graft material remains one of the most serious complications of aortic surgery and presents significant treatment challenges [4]. The most widely accepted procedure for arterial reconstruction is extra-anatomic bypass grafting in a sterile field with either immediate or staged complete excision of infected prosthetic material. But long-term patency of these grafts is less than optimal, for axillofemoral bypasses, five-year patency rates of 43% have been reported. In addition, aortic excision carries the risk of fatal aortic stump blow-out with rates as high as 20% [4]. Antibiotic-soaked polyester prosthetic graft is an alternate conduit which can be used for in situ aortic reconstruction. Despite the benefits of expedient restoration of in-line flow to the lower extremities, reinfection rates exceed 10% [5-7]. Autogenous deep femoral and saphenous veins for the creation of a neoaortoiliac system (NAIS) have been used, Beck et al. [8] reported a 5-year primary patency rate of 82% and and Ali et al. [9] reported a cumulative primary patency at 72 months of 81% and limb salvage was 89%, with a five-year survival of 52%.

Aortic allograft has been used as a conduit for arterial reconstruction. Studies have demonstrated that cryopreserved allograft replacement is an effective and durable alternative for the treatment of aortic prosthetic graft infection, with improved outcomes in comparison with the traditional treatment of graft excision and extra-anatomic bypass grafting. But concerns about their availability, preservation, and risk of later deterioration avoids the widespread use of this alternative [10-14].

Use of bovine pericardial tubular graft has been used for the replacement of thoracic aorta [15-17] and experimental studies probe its use for abdominal aorta reconstruction [18]. However, the use of bovine tubular graft has not been reported for aortobifemoral reconstruction in humans. This report provides an alternative for the surgeon for aorto iliac and femoral reconstruction with biological material for the treatment of aortic graft infection, but long term follow-up will be necessary to confirm its safety.