Report of a patient with seven years old and effort intolerance progressing. The child had tachycardia, pansystolic murmur in the aortic focus. Echocardiography showed left ventricle hypertrophy and aortic narrowing at the level of sinotubular junction with sistolic gradient of 190 mmHg. Cardiac catheterization confirmed the diagnostic suggesting left coronary ostium stenosis. The surgery was performed modification the technique, described by Sousa. Immediate post-operative has presented no complications, with gradient of 23 mmHg, and good leaflets mobility.

Supravalvular aortic stenosis (SAS) has been described as uncommon disease, caused by a deletion in chromosome 7q1123, causing a deficiency in the production of the precursor of elastin, tropoelastin, which triggers loss of elasticity of the vessel wall.

This disease needs immediate surgical correction due to impairment of left ventricular function by pressure overload produced by the stenosis. In half of cases, it is associated to stenosis of pulmonary arteries, or in more unusual cases to anomalous origin of coronary arteries and patent ductus arteriosus[1].

For surgical correction of the SAS it is reported the use of four techniques:

In this report we present the case of a child diagnosed with supravalvular aortic stenosis, who had undergone reconstruction of the sinotubular junction, associated with the enlargement of three sinuses of Valsalva, and use of autologous pericardium in one of these sinuses.

7-year-old female child, white, referred to a visit to the cardiologist presenting progressive limitation to physical effort and tachycardia. The cardiovascular examination revealed a hyperdynamic pulse at apex in the fifth intercostal space at anterior axillary line and parvus et tardus radial pulses. On auscultation, the heart sounds were rhythmic, with paradoxical second sound, and pansystolic murmur predominantly aortic irradiated to the wishbone, left sternal border, right and left supraclavicular region and back. Electrocardiogram showed sinus rhythm, axis at 70º, and overloaded left ventricle. Magnetic angioresonance showed significant left ventricular hypertrophy associated with valvular and supravalvular aortic stenosis. On angiography, the images were compatible with severe supravalvular aortic stenosis with manometric measurements in the aorta of 98 x 58mmHg and in the left ventricle of 189 x 10mmHg.

The surgery was performed with cardiopulmonary bypass, cannulation of aorta and vena cava using anterograde cold blood cardioplegia (4ºC) for myocardial protection, with the patient at 31ºC. Figure 1 shows the anatomical aspect of supravalvular aortic stenosis before surgical correction. Transverse incision was performed in the aorta just above the stenosis, which showed: significant stenosis of the sinotubular junction, extensive fibrosis of the aortic wall, aortic valve commissural fusion, as well as significant narrowing of the left coronary sinus. It was performed resection of the supravalvular annulus and mainly of the fibrosis near the valve commissures. We performed exploration of the coronary ostia with bougies of 1.5 and 2mm in diameter and enlarging the right, left and non-coronary sinuses of coronary incisions. Supravalvular fibrosis stenosis was resected on the left coronary artery ostium, without leaving fibrous tissue. 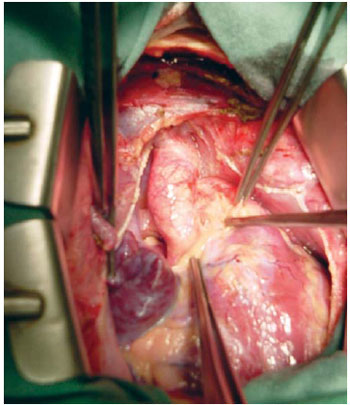 We opted for a technical correction as described by Sousa. Due to possible distortion of the ostium of the left coronary artery, we chose to implant patch of autologous pericardium in the left coronary sinus, near the commissure between the non-coronary and left coronary leaflets. Then three longitudinal incisions of approximately 1.5cm were performed in the distal aorta in regions corresponding to the commissural posts of the proximal portion, for subsequent running suture with 6-0 polypropylene (Figure 2). We peformed the warming of the patient at 37ºC, removal of air from the left cavities and aorta, declamping of the aorta, heart rate return to normal, disconnection of cardiopulmonary bypass (CPB), decannulation, protamine administration, review of hemostasis, and layer synthesis. 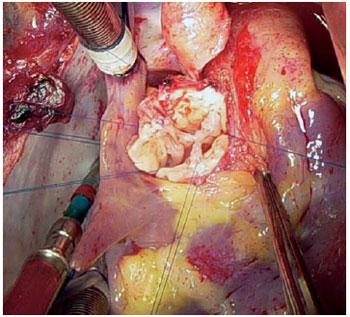 The postoperative follow-up was uneventful, with a maximum systolic gradient of 23 mmHg and mean of 12mmHg, good mobility of valves without reflux (transthoracic echocardiogram). The patient was discharged from hospital on the 11th day.

In the 180-day follow-up, a child was in functional class I, without cardiovascular symptoms. During this period the echocardiogram showed tricuspid aortic valve, slightly thickened with minimum reflux under color-Doppler, generating peak systolic valve gradient of 20mmHg and supravalvular of 30 mmHg. The diameter of the aortic annulus measured 13mm and 12mm for the supravalvular region.

This report was approved by the Ethics and Research Committee (CEP) at the Dante Pazzanese Institute of Cardiology, under No. 3794 protocol.

The SAS represents 0.05% of all congenital malformations, the disease is included in the called obstructive lesions of the left ventricular outflow tract. In 1993 it was discovered that the disease is caused by deletion in chromosome 7q1123, causing deficiency in the production of the precursor of elastin, tropoelastin, which triggers loss of elasticity of the vessel wall.

Pathophysiologically, the change causes loss of elastin fibers, which are sparse and spatially disorganized. The stress of the blood pressure curve stimulates the production of fibrosis and increase of the middle layer by hypertrophy of muscle cells and collagen formation[1].

Classically, the SAS presents in two forms: localized or diffuse. The localized form represents 80% to 85% of cases, and generally impairs the ascending aorta, which has reduced size and slightly thickened walls. The diffuse form has global involvement of the ascending aorta, aortic arch, supravalvular vessels including other areas. Other malformations in 30% to 40% of cases, may accompany this disease, such as aortic coarctation, patent ductus arteriosus, interatrial communication, stenosis of pulmonary arteries, a reason this disease should not be considered as an isolated entity. Changes in the mitral valve, tetralogy of Fallot, as well as phenotypic abnormalities are associated with Williams-Beuren syndrome[6].

In the case reported in this article, we used the technique by Sousa, which consists of large dissection of the root up to the aortic arch, transverse section of the ascending aorta just above the stenotic area, performing three sections: the first toward the non-coronary sinus and the second toward the bottom of the right coronary sinus, at left of the ostium of the right coronary artery and the third section toward the left coronary sinus, at right of the left coronary artery ostium. In the distal ascending aorta, longitudinal incisions are performed in the three regions corresponding to the commissural posts of the proximal portion of the aorta. The depth of the incisions should be enough for the three protrusions may occupy the distal aortic sinus of Valsalva bottom[5].

As a variation of the technique described above, we added a patch of autologous pericardium in the left coronary sinus, near the commissure between the coronary and non-coronary left leaflet to avoid distortion of the ostium of the left coronary artery, caused by large fibrous tissue resection performed in aortic wall next to it. Sousa et al.[5] have reported evolutions in 4-12 years without deaths, with residual gradients ranging from 4.5 to 26 mmHg, mild aortic insufficiency in 76.5% of patients and valve competence in 23.5%.

Other techniques, such as the repair of double-sinus and repair of a sinus of Valsalva, both with use of prosthetic material, have acceptable survival (98% in 5,10,15 and 20 years). The risk of reoperation was present in those patients who presented late gradients above 35mmHg[2,3].

Other series that compare techniques of Doty[3] and Brom & Khonsari[4], such as the experience of Boston Children's Hospital, in 75 patients with follow-up of 41 years, showed 100%, 96% and 77% survival in 5, 10, and 20 years respectively. The diffuse stenosis of the ascending aorta was a risk factor for both death and for reoperations. The technique of Brom & Khonsari[4] showed to have a lower probability of reoperation, residual gradients and moderate heart failure[2].

The presented case demonstrates several aspects. Due to the wide margin of fibrosis and the thickness of the aortic wall, it was performed its resection, respecting the mobility of the leaflets, and release of obstruction of the ostium of the left coronary artery, caused by this obstruction. Therefore, for the treatment of significant stenosis it was chosen the Sousa's technique and placement of patch in the left coronary sinus, thus avoiding distortion of the left ostium with full valve competence.

Some associations excluded: associated pulmonary artery stenosis, coronary flow and abnormal anatomy of the coronary arteries, as well as proof through genetic evidence of non-existence of the Williams-Beuren syndrome. It is important to emphasize the no use of artificial prosthetic material, ensuring development and growth of the sinotubular junction of aorta.