We report on a case of a 57 years-old white male, patient, who presented superior vena cava syndrome (SVC) for 3 months, derived from an invasive thymoma in the medium and anterior mediastinum, compromising intrinsic and extrinsic to the SVC. After evaluation by computed tomography and magnetic angioresonance of the thorax, the patient underwent radical resection of the thymoma - bypass from left subclavian vein to right atrium, using polytetrafluoroethylene tube. Relevant case of invasive thymoma causing the occlusion of SVC. The clinic evolution of the patient after 7 months was considered satisfactory.

The syndrome of superior vena cava (SVC) is disabling and potentially life-threatening; it is the result of a complication from a neoplastic or inflammatory disease of the mediastinum. In this scenario, the mediastinal malignancies appear as a major cause of SVC syndrome[1].

Despite the higher incidence of mortality caused by thoracic tumors involving the heart and great vessels, there is a large number of patients holding this disease - which present no conditions to face a surgical resection, due to technical difficulties or for presenting high morbidity and mortality for the procedure and/or low impact on survival. Although few patients agree with the palliative treatment using radiotherapy and chemotherapy, many of the thoracic tumors are of poor prognosis[2]. There is a subgroup of patients who presents immediate risk of life, caused by congestive heart failure, by systemic embolization and/or cardiovascular collapse. Palliative therapy is ineffective and radical surgical therapy is the only option[2].

Radical resection and reconstruction of the superior vena cava with cardiopulmonary bypass (CPB) is mandatory in cases of advanced thymoma[3], although the CPB is rarely needed in non-invasive thymoma resection.

Thymoma is a rare disease, although referred to as the most common tumor of the anterior mediastinum, comprising approximately 20% to 30% of mediastinal masses in adults. It occurs mainly in the 5th and 6th decade of life and two types are described: the non-invasive, encapsulated (about two thirds of cases) and the invasive[4]. What really sets its malignancy is found during surgery: a) local invasion (lung, pleura, pericardium, great vessels, diaphragm), b) intra-or extrathoracic metastases.

Caucasian male patient, 57 years-old, with signs and symptoms of superior vena cava syndrome (SVC) presented during examination an important jugular vein engorgement, edema of the face, neck and anterior chest wall, left lid ptosis, difficulty swallowing and breathing, an increase of approximately three months. The same patient already had undergone a partial thymectomy in another department, whose immunohistochemical report was diagnosed with thymoma B3 (well-differentiated thymic carcinoma), being followed by treatment with external beam radiotherapy.

Fig. 1 - Images of the arterial and venous angioresonance of the thoracic vessels. The arrows indicate occlusion of the superior vena cava and the right innominate caused by a mildly heterogeneous mass located in the middle and anterior mediastinal

Surgical treatment was indicated, and with due consent, the patient underwent complete resection of the superior vena cava and the right brachiocephalic vein and part of the left vein, with the performance of a shunt with an intravenous tube of Polytetrafluoroethylene (PTFE) 8mm from the left subclavian vein to the right atrium (Figure 2). The arterial cannulation was performed in the aortic arch and the venous drainage through the inferior vena cava with the aid of cardiopulmonary bypass (CPB). 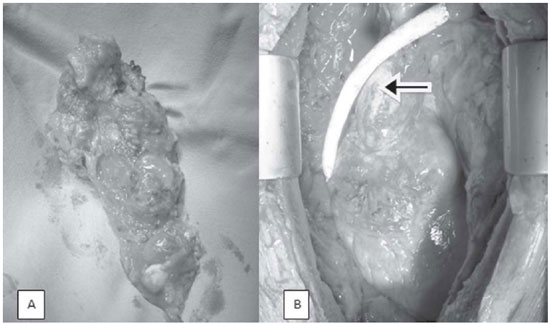 Fig. 2 - In image A, is represented the macroscopic appearance of the tumor, removed en bloc with the involved vessels. In image B, the arrow indicates the shunt vein, left subclavian vein and right atrium performed with an 8mm PTFE tube

CPB was initiated from the resection of the tumor in the right atrium, so that there was better venous drainage and isolation of the proximal segment to the right atrium. This atrium showed the presence of a mobile and dry tumor tissue, requiring the need for partial clamping, but without requiring the use of cardioplegic solution. The CPB time was 35 minutes. The histological analysis of the surgical specimen was diagnosed as thymoma B3 (well-differentiated thymic carcinoma).

On the 5th postoperative day it developed myasthenia gravis, being treated with pyridostigmine (Mestinon ®) and prednisone. After removal of the chest drains, the patient was anticoagulated with sodium warfarin (keeping track of the TAP monthly).

The patient was discharged after 15 days of hospitalization to perform outpatient chemotherapy. The postoperative observation was conducted for a period of seven months.

An important fact in this case was the occurrence of occlusion of the superior vena cava and the right brachiocephalic vein caused by invasive thymoma, without finding in the scientific literature or quotes of RBCCV, any reports of a similar case.

The SVC syndrome is usually associated with malignancy and poor prognosis[5]. These cases include lung cancer in advanced stages (57%), mediastinal tumors (20%), and solid metastases (5%)[4]. Thymoma leading to SVC syndrome is rare (4%), and the most common cause is extrinsic compression[4]. In international scientific literature, are found only nine cases of intracaval growth reaching the SVC syndrome[6].

From this case, we find that small thymomas of the anterior mediastinum infiltrated the brachiocephalic vein and grew along the venous flow within the superior vena cava to the right atrium, as polyps[7]. There are discrepancies in the literature regarding the best methods for staging and classifying the disease. The most important methods are of Masaoka et al., which determines the degree of involvement of the disease, clinically and pathologically, and the French Study Group on Thymic Tumors (GETT system), which is based on surgical and pathological aspects of the tumor[5].

Complete resection followed by radiotherapy is the treatment of choice for all thymomas, except in stage IA tumors (of Masaoka)[5], which can be treated only with surgery. Although thymoma is radiosensitive, there is controversy regarding the use of radiotherapy in patients with invasive thymoma.

Most patients with SVC syndrome caused by malignant tumors are treated with radiotherapy or chemotherapy as palliative treatment, and have a median survival of 3 months[4]. Radiological stents are safe and offer rapid palliation, but radical resection in tumors that lead to obstruction and infiltration of SVC and brachiocephalic veins is a rare treatment, as observed in this study. Due to the existence of total occlusion of the superior vena cava by intraluminal growth of the tumor tissue, reaching the right atrium, the use of stents has not been possible, a factor that allowed the endovascular treatment.

In our case, we opted for radical surgery, with the completion of the derivation of the left subclavian vein to the right atrium, because the symptoms resulting from the superior vena cava syndrome cited above have led the patient to a poor quality of life. After surgery and returning to the superior venous drainage, the patient regained weight and performed his daily chores without difficulty and with satisfactory survival of 7 months, free of serious medical complications.