OBJECTIVES: Finding predictors of blood transfusion may facilitate the most efficient approach for the use of blood bank services in coronary artery bypass grafting procedures. The aim of this retrospective study is to identify preoperative and intraoperative patient characteristics predicting the need for blood transfusion during or after CABG in our local cardiac surgical service.
METHODS: 435 patients undergoing isolated first-time CABG were reviewed for their preoperative and intraoperative variables and analyzed postoperative data. Patients were 255 males and 180 females, with mean age 62.01 ± 10.13 years. Regression logistic analysis was used for identifying the strongest perioperative predictors of blood transfusion.
RESULTS: Blood transfusion was used in 263 patients (60.5%). The mean number of transfused blood products units per patient was 2.27 ± 3.07 (0-23) units. The total number of transfused units of blood products was 983. Univariate analysis identified age >65 years, weight <70 Kg, body mass index <25 Kg/m2, hemoglobin <13mg/dL, hematocrit < 40% and ejection fraction <50%, use of cardiopulmonary bypass (CPB), not using an internal thoracic artery as a bypass, and multiple bypasses as significant predictors. The strongest predictors using multivariate analysis were hematocrit < 40% (OR 2.58; CI 1.62-4.15; P<0.001), CPB use (OR 2.00; CI 1.27-3.17; P=0.003) and multiple bypasses (OR 2.31; CI 1.31-4.08; P=0.036).
CONCLUSIONS: The identification of these risk factors leads to better identification of patients with a grater probability of using blood, allocation blood bank resources and cost-effectiveness use of blood products.

Blood transfusion has been an important part of coronary artery bypass graft surgery (CABG) since its beginning [1]. Transfusion rates in cardiac surgery remain high despite major advances in perioperative blood conservation and institutions continue to vary significantly in their transfusion practices for CABG surgery [2-7].

The overall goal for finding the predictors of blood transfusion in postoperative period is to facilitate the most efficient approach for the use of blood bank services in CABG procedures. The aim of this retrospective study is to identify preoperative (demographic and clinical) and intraoperative patient characteristics predicting the need for blood transfusion in coronary artery bypass grafting in our local cardiac surgical service.

After approval by the ethics committee of institution [8,9], we reviewed the records of patients undergoing CABG surgery at the Division of Cardiovascular Surgery of Pronto Socorro Cardiológico de Pernambuco (PROCAPE) from May 2007 to April 2010. We excluded patients whose records did not contain the necessary data concerning the variables to be studied, those who had a previous cardiac surgery and also those who underwent cardiac surgery concomitant CABG, leaving only isolated primary CABG surgery for the study.

Data were analyzed using percentage and descriptive statistics measures: mean, median and standard deviation. The following testes were used: t-Student with equal or unequal variances (for parametric variables) and chi-square test or Fisher's exact (as appropriate, for non-parametric variables). In the study of bivariate association between categorical variables, the values of the Odds Ratio (OR) and a confidence interval (CI) for this parameter with a reliability of 95.0% were obtained.

Multivariate analysis was adjusted to a logistic regression model to explain the proportion of patients who received blood products that were significantly associated to the level of 20.0% (P <0.20). The model was constructed by a backward elimination procedure [10], remaining significant variables in the model of up to 10.0% (P<0.10). We selected only categorical variables to compose the regression model. By this procedure, we set the initial model involving all selected variables. At each step, one non-significant variable is removed and a new model is adjusted to a point that all other variables in the model have significant contribution to a particular level of significance chosen previously to explain the probability that a patient has used blood products. The process uses the same criterion to determine the significance (same P-value) and, each step, the variable with the smallest contribution to the model (or variable with the largest p-value) is removed and a new model is set with the remaining variables in the model. This procedure is repeated until no variable can be removed. Through this model, OR values are estimated, according to the independent variables placed on the model.

The level of significance in the decision of the statistical tests was 5.0%. The program used for data entry and retrieval of statistical calculations was SPSS (Statistical Package for Social Sciences) version 15.0. 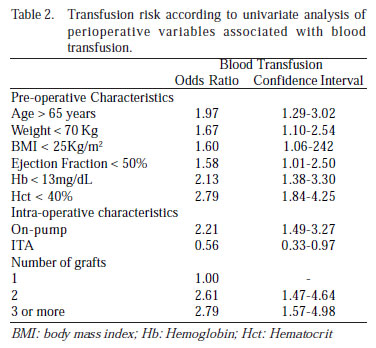 This study identifies the independent risk factors for the prediction of blood transfusion during or after CABG surgery in 435 patients. In this patient population, there was an overall transfusion rate of 39.6%. In the literature, percentages of 25% to 95% of patients receiving blood products after CABG surgery have been described. Stover et al. [6] suggested that this variability could not be explained by a difference in patient preoperative characteristics or the length of CPB or solely by the calculated perioperative blood loss. This difference appeared to be institution dependent; in some institutions, the use of blood products appeared excessive relative to the perioperative blood loss [6].

In a systematic review involving 21 studies [18], blood transfusions were more frequently administered to adults who were older in age. In our study, we compared this variable numerically and categorically. We did not observed difference in numerical comparison between the two groups, but when we categorized in two other groups (>65 years or < 65 years), blood transfusion was more often present in the >65 years group). Elmistekawy et al [19], in a prospective observational study including 105 patients undergoing isolated primary CABG, observed difference in both numerical and categorical comparison (using the same categorization we did). But as we, in multivariate analysis model, this variable was not an independent predictor for blood transfusion.

In the present study, weight < 70 Kg was a predictor (not independent) of blood transfusion. It was not observed any relationship with obesity (BMI > 30 Kg/m2) or BMI < 25 Kg/m2. Elmistekawy et al. [19] observed the same, justifying the choice for body weight (and not BMI) for analysis in most models owing to the fact that univariate analysis and multivariate analysis proved that weight was a stronger predictor for blood transfusion than BMI in their cohort. Scott et al. [15] studied impact of decreased body weight (< 83 Kg) were significant predictors of transfusion.

Depressed left ventricular function (EF <50%) was a risk factor (not independent) for blood transfusion during or after CABG in the present studied population. Arora et al. [12], studying 3046 consecutive isolated CABG patients over 3 years to identify independent predictors of allogeneic blood product transfusion, showed that ejection fraction 0.40 or less was a strong predictor, including this variable in a validation of a prediction model tested in 2117 consecutive CABG patients.

Although we have seen that several variables showed some association with the need for blood transfusion during or after CABG in the univariate analysis, two of these proved to be the strongest and independent predictors of postoperative transfusion in our institution: on-pump surgery and Hct < 40%.

Cardiopulmonary bypass activates the complement and fibrinolytic cascade, contributing to postoperative bleeding [21]. In a previous study in our institution [22] involving 941 women, with the aim of comparing outcomes between on-pump and off-pump CABG, there were minor rates of hemorrhagic shock and also the reduction of need for blood transfusions in the off-pump CABG group in comparison with on-pump CABG group. Nuttall et al. [23] showed that off-pump CABG surgery reduces perioperative bleeding and is associated with an overall reduction in allogeneic transfusion requirement. The present results show that on-pump surgery has a detrimental effect in postoperative blood transfusion (OR 2.00; P=0.003 in multivariate analysis).

Although we have not found a statistically significant difference in time of exposure to CPB between the groups, this is something that probably has some influence on the need of blood products. Souza & Moitinho [24], in a study involving 101 patients undergoing cardiovascular surgery, showed that patients with CPB time over 120 minutes show a trend of greater need of hemotransfusion if compared to those with lower CBP time. They also verifyed that, regarding patients' age, there was no important association between hemotransfusion need and surgery in an elderly patient. However, the association of surgery in elderly patients and CBP time superior to 120 minutes resulted in a larger postoperative use of blood products.

Perhaps one way to minimize the impact of CPB in necessity of blood components transfusions is the application of techniques of hemoconcentration. Souza & Braile [25] developed a study to evaluate a technique of hemoconcentration during heart surgery with CPB with and without a hemoconcentrator and the necessity of blood components transfusion in patients. They verifyed that this technique of hemoconcentration used during on-pump heart surgery was efficacious in the removal of fluids and allowed a greater utilization of the blood remaining in the oxygenator and a lesser necessity of blood component transfusion. They also argued that, apart from reducing the demand from the blood banks and diminishing the costs, a reduction of blood transfusions could result in a reduction of postoperative complications and, in particular, of long-term mortality rates in patients submitted to on-pump heart surgery. Another techniques promise to become more used in the future to avoid blood loss and need of transfusion, [26-28], reducing the presence of a factor associated with increased morbidity and mortality in several studies [29-34].

Preoperative anemia is an independent risk factor for morbidity and mortality after cardiac operations, and specifically for coronary operations [35,36]. The consequence of low values of Hct before or during the operation is, of course, a higher risk of receiving allogeneic blood products during or after the operation. In fact, the preoperative Hct is the major determinant of transfusions in cardiac surgery [37,38]. In our study, Hct < 40% was the strongest independent predictor for blood transfusion (OR 2.58; P<0.001 in multivariate analysis).

We point to the following limitations of this study: it was an observational investigation in which unknown variables could have influenced final results; the retrospective design of this study is vulnerable to a lot of bias; some data were lacking (e.g. intra-operative and/or postoperative blood loss), making the results less accurate; the sample size is relatively small, which explains some variables found to be important predictors in larger studies (e.g. age, gender) were found not to be related to transfusion in this study; our institution does not have clinical protocols or clinical thresholds for transfusion during or after CABG, so there was no uniformity in the criteria for transfusion in all patients; this is a sample of the institution, so that patients were not operated by the same surgeon, but, by various existing teams in the hospital; we did not analyze the pre-operative use of anti-platelet drugs, which possibly should have some influence on the appearance of bleeding and therefore transfusions.