INTRODUCTION: Retrograde autologous priming (RAP) is a cardiopulmonary bypass (CPB) method, at low cost. Previous studies have shown that this method reduces hemodilution and blood transfusions needs through increased intra-operative hematocrit.
OBJECTIVE: To evaluate RAP method, in relation to standard CPB (crystalloid priming), in adult patients.
METHODS: Sixty-two patients were randomly allocated to two groups: 1) Group RAP (n = 27) of patients operated using the RAP and; 2) Control group of patients operated using CPB standard crystalloid method (n = 35). The RAP was performed by draining crystalloid prime from the arterial and venous lines, before CPB, into a collect recycling bag. The main parameters analyzed were: 1) CPB hemodynamic data; 2) Hematocrit and hemoglobin values; 3) The need for blood transfusions.
RESULTS: It was observed statistically significant fewer transfusions during surgery and reduced CPB hemodilution using RAP. The CPB hemodynamic values were similar, observing a tendency to use lower CPB flows in the RAP group patients.
CONCLUSION: This investigation was designed to be a small-scale pilot study to evaluate the effects of RAP, which were demonstrated concerning the CPB hemodilution and blood transfusions.

To reduce the need for homologous blood, and its known risks, the use of crystalloid priming in CPB has been considered the standard practice for decades. This has advantages for blood flow and organ preservation, but results in a mixture with the patient's blood, causing a hemodilution, and, paradoxically, may lead to the need for blood transfusions during surgery. Although this method is widely used as standard CPB, hemodilution is associated with significant mortality and other adverse conditions, especially when the hematocrit reaches values below 20% [1].

In an effort to reduce the effects caused by hemodilution or transfusion requirements in cardiac surgery, several strategies have been proposed including the donation of autologous blood preoperatively or intraoperatively, the use of cell saver to concentrate red blood cells and increased hematocrit, autotransfusion of blood postoperatively lost, and the use of pharmacologic agents to promote clotting after CPB [2,3]. Among these options, studies have shown that routine use of hemofiltration and/or cell saver improves the quality of surgical care [4-6].

Retrograde autologous priming (RAP) is a method of CPB, at low cost, which has been described [1,7] as modification of the method proposed, in 1959, by Panico and Neptune [8]. Previous studies have shown that this method reduces hemodilution during CPB, the reduction of blood transfusions by increasing the hematocrit intraoperatively, especially in patients who have risk factors as anemia, small body surface area, and refuses to receive blood products [1]. This method uses the patient's own blood during of the pump system setting up. Jansen et al. [9] had already shown that reducing the volume it was possible to attenuate the hyperdynamic response after CPB and reported a significant reduction in the use of the blood bank.

This prospective, randomized study was carried out to evaluate the RAP method in relation to CPB standard method, analyzing the hemodynamic values, lactate, hemoglobin and hematocrit, and the need for blood transfusions in adult patients undergoing CABG with CPB. The study does not pretend to be original, it only intended to draw attention to a CPB method, not always remembered, which positively affects two critical parameters: the hemodilution and the transfusion of blood and blood components. It is an inexpensive and effective practice in relation to other more sophisticated methods such as "mini-circuits" and "cell-savers."

Composition of the groups

The study was approved by the ethical committee of the Hospital of Clinics from the Ribeirão Preto Faculty of Medicine, University of São Paulo, Brazil. A group (RAP group; n=27) of adult patients was operated using the RAP method and another group was operated, without RAP method, using standard crystalloid prime CPB (group control, n=35). Exclusion criteria were age less than 18 years or greater than 85 years, left ventricular ejection fraction smaller than 30% and emergency surgery. In both groups was used membrane oxygenator. All patients were admitted to the intensive care unit and treated as the same standard clinical practice. The physicians responsible for postoperative care of the patients were blinded with respect to the study group.

The original RAP method, described by Rosengart et al. [7], modified by Eising et al. [10], as follows, was adopted in this investigation (Figure 1). Before RAP starting, mean arterial pressure (MAP) was elevated to approximately 100 mmHg, using small doses of intravenously administered phenylephrine. A recirculation bag was connected to the venous line. The crystalloid priming fluid of the venous reservoir was drained to a minimal level into the bag. The venous side of the circuit was than drained, slowly replacing the crystalloid priming volume by filling the circuit with patient's blood. The recirculation bag was then disconnected from the venous line and connected with the purge line of the arterial filter. The retrograde priming was then continued until the blood volume in the venous reservoir reached approximately 200 mL. This fluid mixture of the venous reservoir was slowly pumped through the membrane oxygenator and the arterial filter, displacing the priming fluid of the tubing, the oxygenator, and the arterial filter into the recirculation bag. The arterial line connecting the patient with the arterial filter was clamped at that time. Finally, the arterial line was drained into the recirculation bag by replacing the crystalloid fluid with the patient's blood. The procedure was performed with the patient's hemodynamics carefully controlled. 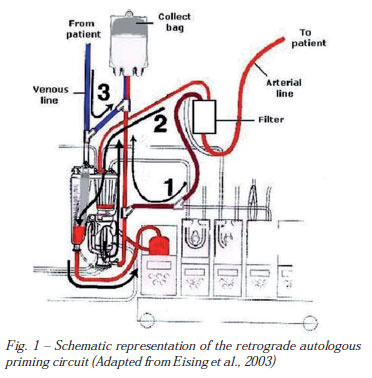 The recirculation bag was then reconnected with the venous reservoir so that crystalloid fluid replacement could be performed during CPB upon hemodynamic requirements. The retrograde priming procedure requires 4 to 5 minutes before the onset of CPB.

All the data described in the results were analyzed through the T student test, when inside of the normality, or test of Mann-Whitney, when out of the normality. The qui-square test was adopted to analyze the number of transfused bags of blood and derivates. The adopted level of significance was P<0.05.

Characteristics and surgical data of the groups RAP and control

Both, RAP and control groups, presented similar clinical-surgical characteristics, which are presented in Table 1.

Mean arterial pressure (MAP) values during CPB were similar in both RAP and control groups (P>0.05) (Table 2, Figure 2A). 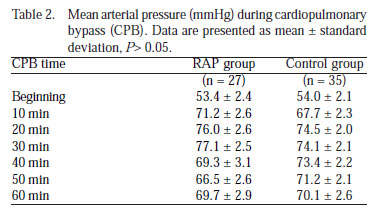 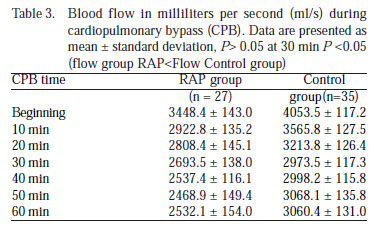 The CPB systemic arterial resistance (dynes.s.c-5) calculated from the relationship between MAP and BF, and was statistically similar (P>0.05) (Table 4, Figure 2C). 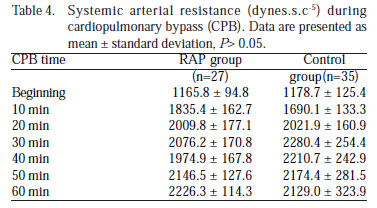 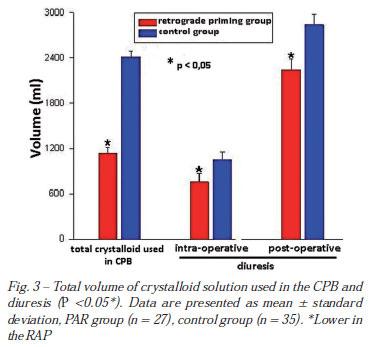 Autotransfusion under the RAP modality has only gained popularity during the last few years. Low hematocrits during CPB are associated with increased risk of in-hospital mortality, intra or postoperative, use of intra-aortic balloon, and return to the pump after initial weaning. The method described has the potential to allow for the perfusionist to lower the hematocrit to a desired level by adding aliquots of clear prime from the prime bags. Another advantage is that most prime displacement occurs in an antegrade direction from the venous line. This contributes to avoid hemodynamic instability at the start of CPB. These advantages were fully observed on the 27 RAP patients included in the study.

The hemodilution associated with the use of an asanguineous (crystalloid) CPB priming results in decreased intraoperative and postoperative hematocrit values in patients undergoing cardiac operations. The current study demonstrated that RAP can safely be used to decrease the crystalloid pump prime and the associate hemodilution. Therefore, the number of patients requiring red blood cell transfusion could be reduced by avoiding the obligatory transfusions triggered by low hematocrit values below minimum safety limit. In the present series of patients this advantage was observed during CPB, and IT was not the case considering the intra-operative as a whole, and in the early postoperative period. Patients undergoing cardiac operations who will require transfusions can be predicted before the operation by a number of variables, including red blood cell mass [11]. This is consistent with the assumption that patients with a low red cell mass are more likely to have low hematocrit values and therefore require transfusions after CPB as a result of the proportionately greater hemodilution caused by CPB in these patients.

As already described in this article, RAP is safe and extremely well tolerated with none morbidity and mortality, related to the method, among patients enrolled in the study. However, there are potential risks described in the literature, and deserve consideration. One potential risk of RAP, paradoxically, is related to its efficiency in minimizing hemodilution in patients undergoing CPB. Early investigators had demonstrated that an inverse linear relationship exists between temperature and blood viscosity, since blood viscosities can increase 10% to 30% under the hypothermic conditions associated with CPB Therefore, moderate hemodilution during CPB has been considered desirable in avoiding this increased viscosity and potential microcirculation damage, and such a degree of hemodilution has generally been provided by a total crystalloid prime [12]. A second theoretical risk of RAP is related to the potential of hemodynamic instability caused by the large volumes of crystalloid solution withdrawn during the RAP process [10]. It is somewhat unexpected in considering the relative hypovolemia induced by RAP that a significant volume or pressor requirement was not subsequently observed in patients subjected to RAP. In fact, withdrawal of RAP volumes was well tolerated, with hemodynamic parameters and pressor requirements that were equivalent to those in control patients. Although some patients require reinfusion of RAP volumes, clinical experience suggested that correction of preoperative dehydration minimized the incidence of RAP reinfusion.

Despite the advantages attributed to the use of RAP few studies were carried out in the last decade. Although recent isolated studies confirm the benefits of recent RAP [13], at least two studies in meta-analysis are not favorable [14,15]. These results suggest that overall.

Over the past 10 years there has been a marked decrease of the publications on PAR. It is curious to observe that over the same past 10 years, the concept of minimized CPB has been devised with the same aim of reducing the side effects and strengthening the advantages of standard CPB [16,17]. Alternatively, CPB method with decreased need for blood transfusion, merits citing the increasing routine use of vacuum assisted venous drainage [18].

Finally, the present study was designed to be a small-scale pilot study to evaluate effects of RAP, which could be demonstrated, without any proved hemodynamic advantage. RAP should be further investigated in a larger cohort, preferably in high-risk patients with congestive heart failure, lung disease, or renal failure. RAP has, nowadays, to be compared in terms of cost-effective, with CPB minicircuits already available for clinical use.