The aim of article is to give a brief description to the surgical strategies for patients with lone atrial fibrillation without associated cardiac operations, and present the possible indications of on-pump Maze procedures through a mid-sternotomy approach.

Lone atrial fibrillation (LAF) was defined as atrial fibrillation in patients younger than 60 (or 70) years old in the absence of an underlying structural heart disease, such as dilated cardiomyopathy, coronary heart disease, hypertension, and occult thyrotoxicosis [1-4]. LAF can be chronic paroxysmal, persistent or permanent [5]. The prevalence of atrial fibrilation is 0.4% in the general population, increasing to 9% of people over the age of 80 [6]. Palpitations, dizziness, dyspnea, angina and worsening heart failure were the clinical presentations of patients with LAF [6]. Atrial fibrillation now remains the most frequent cause of embolic event, stroke and death [7-10]. The drugs used to lower the ventricular rate are digitalis, verapamil, propranolol and diltiazem. Electric cardioversion is used in serious cases [11].

Catheter ablation has a risk of stroke associated with thrombus produced when tissue impedance increases, heating the blood pool. Left atrial appendage exclusion is impossible with catheter-based ablation. It is often associated with postoperative atrial tachyarrhythmias that might be caused by incomplete and nontransmural ablation lines [12]. Some patients could not tolerant prolonged antiarrhythmic or anticoagulant medications, and percutaneous ablation has brought about some major complications including pulmonary vein stenosis, thromboembolism, and atrioesophageal fistula [2]. The major indications for surgical treatment of LAF were intolerance for antiarrhythmic or anticoagulant medication, and medically refractory arrhythmia [2]. We hereby report our experiences with on-pump mid-sternotomy Maze procedure in three LAF patients without associated cardiac operations.

From October 2004 to June 2008, three patients were diagnosed as LAF and were scheduled only for Maze procedure without associated cardiac operations by mid-sternotomy approach (Table 1).

A 54-year-old male patient had a persistent atrial fibrillation for 4 years with hyperlipidemia and transient ischemic attack. He was diagnosed as LAF and received percutaneous pulmonary vein isolation (PVI). However, atrial fibrillation persisted after the procedure during the follow-up. He was thus referred to the Department of Cardiac & Thoracic Surgery for a surgical treatment. He was undergone an open-chest Maze procedure under standard cardiopulmonary bypass and aortic root infused cold blood cardioplegia. After induced cardiac arrest, left atrial appendage was excised.

An irrigated bipolar radiofrequency ablation system (Cardioblate BP, Medtronic, Minneapolis, MN, USA) and a Medtronic CardioblateTM pen (Medtronic, Minneapolis, MN, USA) were used to make transmural lesions, including encircling radiofrequency lesion on right pulmonary vein, left atriotomy in the interatrial groove, a radiofrequency lesion and a cryolesion at the mitral annulus, left atrial appendage excision and a perpendicular radiofrequency lesion to the anteromedial tricuspid valve annulus, and another encircling the left pulmonary vein. After the operation, his heart rhythm was sinus with incomplete right bundle branch block (Figure 1). No cardioversion was necessary, and antiarrhythmic drugs were gradually withdrawn 3 months after the operation. He was complicated with post-pericardiotomy syndrome and was treated with nonsteroidal anti-inflammatory agents.

A 51-year-old male patient had a persistent atrial fibrillation for 4 years with hyperlipidemia and diabetes mellitus. He was diagnosed as LAF but he had intolerance prolonged oral anticoagulant therapy. He received Maze procedure via port access. However, atrial fibrillation persisted after the procedure, and he came to us for an open-chest Maze procedure under standard cardiopulmonary bypass and aortic root infused cold blood cardioplegia as described above. After the operation, his heart rhythm recovered to sinus but with fist degree atrioventricular block. No cardioversion was necessary, and antiarrhythmic drugs were gradually withdrawn 3 months after operation. He was uncomplicated.

An obese 67-year-old female patient had a paroxysmal atrial fibrillation for 7 years presenting with syncope. She was diagnosed as LAF and received percutaneous PVI but the procedure turned to be a failure. She was referred to our department for an open-chest Maze procedure under standard cardiopulmonary bypass and aortic root infused cold blood cardioplegia as described above. After the operation, her heart rhythm was junctional (Figure 2). She was uncomplicated. She was then transferred to the cardiologist for antiarrhythmic treatment, but her rhythm was still junctional at a 2-year follow-up.

This study was approved by the Ethical Committee of the Institute where the work was conducted. An informed consent was obtained from each patient.

Maze has been popularly used as an alternative of anti-arrythmic procedure [13]. Maze procedures can be classified into 2 types: surgical procedures (Cox-maze/cut-and-sew, and mini-partial maze) and energy-based procedures with radiofrequency, microwave, or cryothermy, etc. [14]. However, we prefer a classification in view of the application of cardiopulmonary bypass (Table 2). 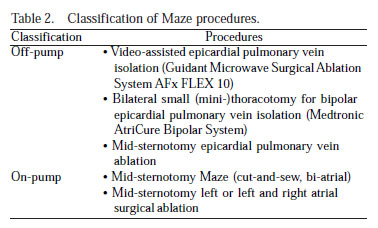 Most of the surgical procedures were carried out under the aid of cardiopulmonary bypass, and therefore they were performed endocardially [15]. The minimally invasive procedure with bipolar radiofrequency devices was developed to achieve bilateral PVI and excision of left atrial appendage through bilateral mini-thoracotomies and thoracoscopy, namely, an epicardial approach [15,16]. This could avoid sternotomy or rib-spreading thoracotomy, and cardiopulmonary bypass [12], and has minimized morbidity of surgical treatment of atrial fibrillation [16]. PVI alone might be effective for most patients with paroxysmal atrial fibrillation and some of the patients with persistent atrial fibrillation [16]. However, the right-sided approach has the drawback of not dealing with the left atrial appendage, and the uncertainty of transmurality of the lesions with microwave energy on the beating heart [2].

No complication was noted concerning bipolar radiofrequency in six patients with off-pump video-assisted PVI, and all six patients were in sinus rhythm within 6-month observation as reported by Bisleri et al. [17]. Video-assisted bilateral PVI with endoscopic stapling of the left atrial appendage has achieved an atrial fibrillation-free rate of 91.3% at 3-month follow-up [12]. The classic Maze procedure could obtain a sinus rhythm in more than 90% of the patients with atrial fibrillation [18]. In this report, two patients were in sinus rhythm and one was in conjunctional at a 1-45-month follow-up.

Energy source approaches including radiofrequency, microwave, cryoablation were developed as alternatives to Cox-Maze III surgery. Continuous linear transmural atrial lesions made by these energy sources may produce heart block [19]. With a unipolar probe, energy disperses in multiple directions, and thus may damage the adjacent structures, such as the esophagus and coronary arteries [14]. With bipolar, the energy produces a transmural lesion, both epicardial and endocardial, within shorter ablation time [14].

Nevertheless, the Maze procedure by mid-sternotomy approach still plays an important role in patients with LAF in several occasions, especially in patients with failed percutaneous PVI. Currently, the Maze procedure for LAF is quite suitable for the patients with previous cardiac surgery and previous catheter ablation [12]. It does not lose its function as an alternative to antiarrhythmic medical treatment, long-term anticoagulation, electrical cardioversion, or catheter-based ablation [12,17]. In the near future, off-pump PVI with additional interatrial lesion and left atrial appendage exclusion or hybrid approaches incorporating both surgical and percutaneous techniques are favored for the surgical treatment of LAF [14]. Even though, the importance of open-chest Maze could not be overlooked.

Our experiences with on-pump mid-sternotomy Maze procedure was indicated for the patients with failed percutaneous PVI, failed heart port Maze procedure, and obesity patients either for left or right Maze. We suggest this procedure should be used in patients older than 70 years, a history of atrial fibrillation of over one year, a history of aortic valve replacement, and failed or repeatedly failed percutaneous PVIs.