The morphology of coronary aneurysm sets a predisposing factor to thrombus formation. However, the blood stasis caused by the change in flow may not be enough to cause thromboembolic events.

Currently, the diagnostic resources have been extensively explored, in order to modify the natural course of disease. Even with the growing availability of coronary angiography, coronary aneurysms in young patients has been an unusual finding. Early diagnosis is essential to avoid undesirable outcomes. However, the big problem is how to proceed in asymptomatic patients.

The coronary aneurysm can be defined as a focal dilatation that exceeds 50% the diameter of the adjacent normal coronary region, and may also be considered giant when the transverse dimension of the vessel exceeds 2 cm [1]. The prevalence of angiographic coronary aneurysms varies from 0.15% to 4.9% depending on the considered literature [2]. The first descriptions of coronary aneurysms began in 1761 with Morgagni, obviously based on autopsies. Most patients do not present any symptoms.

Atherosclerosis is the most common cause, reaching 50% in data released in Europe and the United States [2]. However, we should always consider as relevant causes the Kawasaki Disease and other vasculitides such as polyarteritis nodosa and Takayasu's arteritis, autoimmune diseases, infectious diseases (including syphilis and Lyme disease), connective tissue diseases, congenital malformations, trauma, dissections and complications of procedures such as angioplasty [3]. This last cause has increased in direct proportion to the growth of its practice. Currently, we have discussed the pathophysiology of coronary aneurysm formation after implantation of drug-eluting stents that lead to high local inflammatory activity, followed by vasculitis. Products such as sirolimus suppresses smooth muscle proliferation and neointima for a long time. Since some drugs used in the coating stents may disappear in a few weeks, the persistent inflammatory process has been attributed to the polymer structure of the prosthesis, as well as poor positioning of the filaments [4,5].

Considering atherosclerosis as the main cause of the formation of aneurysms, the histological study of these vessels revealed deposition of lipids in the vessel wall associated with diffuse hyalinization, focal calcification and fibrosis, leading to rupture of the intima and media layers, and intramural hemorrhage [6 ].

The morphology of coronary aneurysm itself sets a predisposing factor to thrombus formation. However, the blood stasis caused by the change in flow may not be enough to cause thromboembolic events. Therefore, the investigation of thrombophilia is critical, especially in young patients, since this association will influence the diagnostic therapeutic management of the patient.

A case that illustrates what is being discussed is that of a 24-year-old female patient, white, body mass index (BMI) of 29, who sought medical care in our hospital complaining of severe chest pain of constrictive type without improving or worsening. The electrocardiogram performed on admission revealed ST segment elevation in inferolateral wall. Ischemic serum markers revealed CPK 338 U/l (NR:145), CK 39 U/l (NR:24), troponin I 3.384 ng/ml (VR:0.060). The patient underwent coronary angiography, which showed obstructive coronary artery disease by total occlusion of the right coronary artery with thrombosed vascular malformation and an image suggestive of coronary dissection, which was performed balloon percutaneous transluminal angioplasty and thrombus aspiration with partial success (Figure 1). 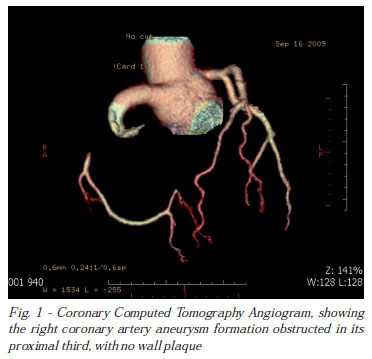 About four hours after the procedure, the patient had a new episode of chest pain associated with typical electrocardiographic changes, reinfarction was diagnosed and administration of tirofiban hydrochloride was started. The patient had remission of symptoms and laboratory improvement. Two days later, the patient developed paresthesia in the first and second fingers in a region adjacent to the puncture of catheterization. Artery color Doppler was performed right upper limb, which revealed obstruction of the radial artery.

Later, it was decided to perform angiography of the coronary arteries by computed tomography, which revealed complete obstruction of the proximal right coronary artery, mural and unmarked sharp increase in the diameter of the portion of pre-obstructive coronary artery, reaching 10 mm in transverse diameter. The coronary artery appeared to have continuity caliber almost completely thrombosed, which later presented the course in a semicircle, having its distal end an amorphous collection of iodinated contrast, located in an antero-superior position to the right pulmonary vein, anteromedial in relation to vena cava inferior and posterior to the ascending aorta at the time of the left atrial appendage. This collection was in contiguity with the wall of the left atrium and presented an image that suggested communication with the superior vena cava through a small path, which may represent a finding of overlapping images. There was opacification of the distal and middle thirds of the right coronary artery, including the marginal artery, probably by collateral.

Two months after the event described above, the patient underwent a new cineangiocoronariography via the right limb, which revealed malformation of the right coronary artery, with severe tubular dilation and significant obstruction affecting approximately 80% of the vessel lumen. The patient developed pain and numbness in the right limb, being performed arterial color Doppler, which revealed occlusion in the distal third of brachial artery by hypoechoic and homogeneous content, suggestive of thrombus located 4 cm from the dissection scar of the catheterization. The patient then underwent brachial artery embolectomy. This was followed by investigation of thrombophilia, with no significant abnormalities in blood tests.

So we opted for surgical treatment, being performed coronary artery bypass grafting with right aortocoronary venous graft, with cardiopulmonary bypass. The patient remained in intensive care unit for 48 hours and was discharged after seven days of hospitalization. The patient is asymptomatic to date and treated with dual inhibition of platelet aggregation with the use of aspirin and clopidogrel. 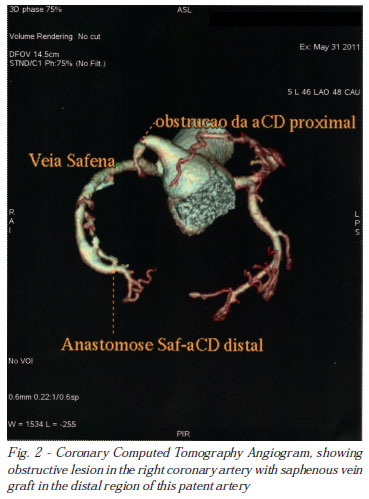