Papillary fibroelastomas of the heart valves are benign, slow-growing, rare tumors of the heart. This tumor represents a potential cause of systemic embolism, stroke, myocardial infarction and sudden death. Early diagnosis is very important, as surgical excision of these tumors can prevent cerebrovascular and cardiovascular complications. Diagnosis is usually made by transesophageal echocardiogram. We describe two cases of patients with papillary fibroelastomas causing cardioembolic cerebral events, which underwent successful surgical treatment. The authors present a brief review of the literature.

Papillary fibroelastoma is a rare primary benign cardiac tumor that usually involves cardiac valves. It represents about 7% of all primitive cardiac tumors, third for frequency after myxoma and lipoma [1]. Their early detection is important because they are a potential cause of systemic emboli, stroke, myocardial infarction and sudden death. Although there is no consensus, prompt surgical excision of these tumors is recommended owing to the risk of preoperative thromboembolic phenomena disabling consequences [2]. We present two cases of papillary fibroelastomas located in the non-coronary cusp of the aortic valve causing cardioembolic cerebral events.

A 77-year-old woman was admitted with history of transitory vertigo and syncope. Her past medical history was significant for hypertension and hyperlipidemia. On physical examination the patient was well nourished, alert and oriented. Her blood pressure was 130/68 mmHg, pulse was 52 bpm. Chest auscultation did note revealed abnormalities. Neurological physical examination was normal. Electrocardiogram showed only sinus bradycardia. Computed tomography demonstrated hypodense lesions of the upper right cerebellar hemisphere and lenticular nucleus with embolic characteristics. Carotid duplex Doppler studies showed no vascular abnormalities. On transesophageal echocardiography, a mobile, rounded echodense mass with 7 mm was attached to the non-coronary cusp of the aortic valve (Figure 1).

Based upon clinical symptoms and echocardiographic findings, the patient underwent surgical excision of the aortic tumor. On cardiopulmonary bypass, aortotomy revealed a friable pink granular mass, which was present at the middle portion of the non coronary cusp. The mass was carefully excised, and, due to impossibility of reconstruction, aortic valve replacement was performed with a 23 mm aortic bioprosthesis. A final pathologic report revealed the presence of a papillary fibroelastoma and the patient's postoperative course was smooth and uncomplicated. She was discharged on the sixth day of post-operative.

A 42-year-old woman was admitted with transient and reversible right hemianopsia associated with paresthesia in the left arm. The patient had no relevant cardiologic history and physical examination showed no pathological findings. Neurological clinical examination was normal. Computerized tomography showed no abnormalities. Echocardiographic examination of the carotid arteries was normal. A transoesophageal echocardiography showed a pedunculated, mobile structure on the aortic surface of the non-coronary cusp of the aortic valve (0.9 cm long), probably a fibroelastoma or vegetation for its physical aspect on image studies. Surgical excision showed a pinkish, friable, myxomatous circumferential lesion attached to the non coronary aortic cusp.

The leaflet was sutured with 6-0 polypropylene sutures, but by excessive tension on the suture line, proceeded to aortic valve replacement with a 25 bioprosthesis. The patient experienced an uneventful postoperative course. Histological examination showed papillary formations with homogenized stroma and slightly broadened endothelial cells on the surface, confirming the diagnosis of papillary fibroelastoma (Figura 2). 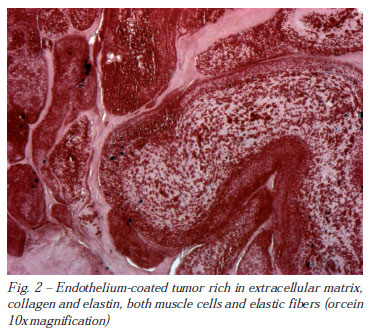 Papillary fibroelastoma is a rare and benign cardiac tumor [3]. Is the third primitive cardiac tumor after myxoma and lipoma, representing nearly 80 to 90% of tumors which take their origin from valvular endocardium. Aortic cusps are the most frequently involved, followed by mitral leaflets [1]. The incidence appears to be equal in males and females. Macroscopically, it is a small mobile mass, measuring between 2 and 28 mm, only 1% being bigger than 20 mm [1].

Microscopically, the tumor is covered by endothelium, which surrounds a core of loose connective tissue consisting of an acid mucopolysaccharide matrix, smooth cells, collagen, and elastin fibers. It may also contain cysts and areas of hemorrhage. Pathogenesis is unclear. Some authors consider it to be congenital, however, the majority seem to be acquired, most likely of neoplastic or thrombotic origin. However the most accepted hypothesis considers these lesions to originate from giant Lambl excrescences, formed by affixing layers of fibrin on the endothelium [2]. The clinical presentation varies widely from asymptomatic to severe embolic complications.

Some common presentations include transient ischemic attacks, stroke, angina, myocardial infarction, death, acute coronary syndrome, and syncope. Embolic fragments may originate from the tumor itself and this occurs because of it very friable and soft texture, or from surface formation of platelet and fibrin thrombi [4]. In the past, the majority of papillary fibroelastomas were occasional findings found during necropsy. More recently, with the advent of echocardiography, an in vivo diagnosis became more frequent, since only masses measuring less than 2 mm are not clearly visible [1,2,5].

The most reliable diagnostic tool is transesophageal echocardiography, and it should be performed before surgery, in order to define location and relation with adjacent structures. The differential diagnosis of this rare and benign tumor is rather extensive and includes the presence of myxoma [6], lipoma [7,8], rhabdomyoma or amorphous tumors [9]. The presence of vegetative endocarditis and Lambl's excrescences should also be considered during the differential diagnosis. While myxomas primarily affect the left atrium, lipoma and rhabdomyoma are characteristically intramural. Endocarditis has clinical diagnostic criteria accurate enough, absent in cases of fibroelastoma.

Moreover, the appearance of fibroelastoma is quite characteristic, resembling a "sea anemone" with multiple ramifications held by a pedicle to endocardium. The best clinical treatment of asymptomatic patients remains unclear. Most authors recommend elective surgical resection in asymptomatic and symptomatic patients because of the unpredictable nature of these pedunculated tumors [1,2], especially larger ones attached to the aortic valve via a pedicle. It is our opinion that tumor resection is mandatory, even if the patient is asymptomatic, unless clinical conditions indicate high surgical risk.

In both our cases, there was an occurrence of recurrent cerebral ischemia. Surgical management of papillary fibroelastoma in aortic valve may include simple resection of the mass, resection with valve repair or resection with valve replacement. Ngaage et al. [10], reporting on the treatment and outcome of patients with cardiac papillary fibroelastoma, demonstrated an 83% rate of simple shave excision without report of recurrence. However, most authors recommend the excision of valve cusp, and valve replacement if repair is not possible. Although we are not in favor or a routine valve replacement, in our cases simple suture after resection of the lesion presented tension, judged as a risk for the development of late dysfunction. Some authors have encouraged the use of the fiberscope for resecting of intracardiac masses as a promising technique [3].

It is our understanding that surgical treatment of papillary fibroelastoma should be performed to avoid stroke, even in asymptomatic patients. It should be considered in the differential diagnosis of cerebral ischemia, especially those with embolic nature shown in CT with unknown cause.