Dr. Cid Nogueira, a cardiovascular surgeon, was born in the city of Araguari, Minas Gerais, on May 6, 1929, son of Achileu Nogueira and Carmen Nogueira.

He died in Brasilia on October 1, 2011, at 82 years of age, after some health problems later in his life when, due to a cardiomyopathy, had to have a synchronizer and an automatic cardiac defibrillator implanted.

He graduated as a doctor by the National School of Medicine, Federal University in Rio de Janeiro.

He started his activities in cardiovascular and thoracic surgery as Medical Officer of the Navy, stationed at Naval Hospital Marcilio Dias, of Rio de Janeiro.

In 1955, he was referred by his boss at the Hospital Marcilio Dias, Dr. Edídio Guertzenstein to start residency in Thoracic and Cardiovascular Surgery at St. Vincent Charity Hospital in Cleveland, Ohio, USA, in the Service of Dr. Earl B. Kay.

In the same hospital, under the leadership of Dr. Earl B. Kay, Dr. Cid Nogueira also had the guidance of other famous medical experts such as Dr. Henry A. Zimmerman, a cardiologist and of the pioneers of cardiac catheterization in the world, David Mendelsohn, Jr., intensivist and anesthesiologist, and Córcoran, who was researcher in cardiac physiology.

We were witnesses of his personal and technical prestige on that service, when in 1960 we began our training as residents in the service of Dr. Kay.

It is interesting to note that Dr. Kay came to Brazil in 1956 and held in Rio de Janeiro, open heart surgery with cardiopulmonary bypass, when he had his first contact with Dr. Cid Nogueira.

The President of Brazil, newly elected at the time, Dr. Juscelino Kubitschek de Oliveira, who was also a physician, witnessed this surgery, along with Professor Dr. Jose Hilario and then young Dr. Cid Nogueira (Figure 1). 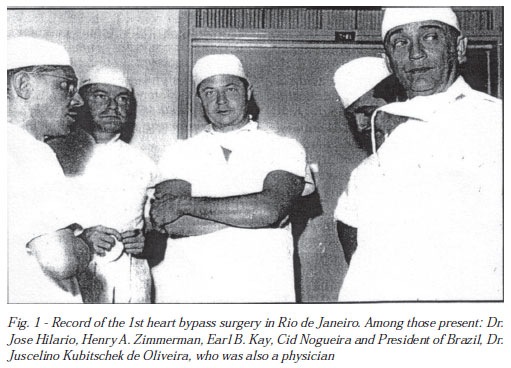 Thanks to the action of our President and all these figures, including the young Dr. Cid Nogueira; Dr. Earl B. Kay left in Brazil a heart-lung pump discs system, Kay-Cross model.

This machine was then used by Dr. Hugo Felipozzi in São Paulo, starting in that city its mass production for all Brazilian cardiac surgeons.

Importantly to highlight his work on resection of aortic valves of patients, followed by replacement of the valves for individualized prosthetic leaflets, made with a plastic fabric of Teflon coated with polyurethane, in order to prevent leakage of blood between the meshes of plastic material.

Dr. Cid Nogueira, along with another resident of Dr. Kay, Dr. Akio Suzuki, of Japanese origin, was one of those who hand-sewn these valve prostheses.

In 1958, Dr. Cid Nogueira in the National Congress of Cardiology in Rio de Janeiro, at the Copacabana Palace Hotel, demonstrated how these valve prostheses were made and implanted in the aorta. I remember the reason we were there, it was a presentation very useful and informative for all of us in Brazil.

Dr. Cid Nogueira, after five years of residence in Cleveland, had the honorable invitation to work in Holland, with medical and surgical groups in Amsterdam and Utrecht, when he had the opportunity to introduce the open heart surgery of the mitral and aortic valves in that country.

In 1966, at the invitation of Professor of Surgery Dr. Jose Hilario, he had the opportunity to organize and manage the Service of Cardiovascular Surgery of the Department of Surgery, Federal School of Medicine in Porto Alegre (UFRGS).

He spent six years working in Porto Alegre. It was him who introduced the use of mitral and aortic prostheses in that city.

In 1968, at the invitation of Professor Dr. Mariano de Andrade, he started working at the Faculty of Medicine in which he had graduated, as well as in several other teaching hospitals in Rio de Janeiro.

From the Public Hospitals of the State of Rio de Janeiro, he was invited to operate in Brasilia, where he was appointed as Chief of Cardiovascular Surgery of the General Staff of the Armed Forces. Dr. Cid Nogueira in his activity as a heart surgeon, trained and prepared numerous specialty surgeons in Brazil, namely, forgive us any omissions: in Porto Alegre, we highlight Dr. John Batista Pereira, Felisberto Ferreira, Nelson Pizatto Ernesto Figueiredo, Ivo Abrahão Nesralla, Polyguara Silveira da Costa, Paul Prates, Gilberto Venossi Barbosa and Blau Fabrício de Souza; in Rio de Janeiro, Drs Antonio Augusto Miana, Alexandre Brick, Eduardo Sergio Bastos and Marco Antonio Cunha, as well as his cousin, also competent expert, Dr. Odilon Nogueira Barbosa, who is currently a cardiovascular surgeon at the National Institute of Cardiology, previously known as Hospital of Cardiology of Laranjeiras.

We shall emphasize that some of his assistants, besides excellent experts, attained the presidency of the Brazilian Society of Cardiovascular Surgery (BSCVS).

At the end of his life, in Brasilia, Dr. Cid Nogueira was appointed and served as a physician in the Senate.

a. contributions to the surgical treatment of septal and valvular complications after acute myocardial infarction;

b. contributions in the resection of left ventricular chagasic aneurysms;

c. "Valve prosthesis. Clinical application of Kay-Suzuki valve." Title of his Thesis defended in his Concourse for Full Professor of Cardiovascular Surgery at Federal University of Rio de Janeiro in 1970, in which he was approved. This thesis refers to the application in 60 patients with prosthetic valve disk of pyrolytic carbon, which passed into the left ventricle without turning to a vertical position, thus occupying the smallest space in the left ventricle.

Dr. Cid Nogueira was a Founder and Member of the Brazilian Society of Cardiovascular Surgery.

In 1969, the XXV Brazilian Congress of Cardiology in Belo Horizonte, at the time of the First Ordinary General Assembly of the Department of Cardiovascular Surgery of the Brazilian Society of Cardiology, Dr. Cid Nogueira was elected to the board of the latter, together with the Dr. Domingos Junqueira de Moraes, Delmont Bittencourt, Luiz Carlos Bento de Souza and Ivo Nesralla.

In addition, we can say that cardiovascular surgery in Brazil as a whole deeply grieves over the death of this brilliant Brazilian Cardiovascular Surgeon.