Coronary artery bypass grafting (CABG) operations are performed safely and successfully in our country as well as in the rest of the world. Acute kidney injury (AKI), not rarely seen following cardiac surgery, is associated with morbidity, increased health costs, and mortality rates[1,2].

The risk factors and pathophysiology of AKI following CABG were described in the literature and have been the subject of multiple studies[3,4].

The incidence of AKI following cardiac surgery has been reported as being 5-30% and renal replacement therapy is required in 1-2% of these patients[5,6]. Hemoglobin A1c (HbA1c) is widely used as a marker of average blood glucose concentrations over the preceding 2 to 3 months and it has advantages over glucose tests[7]. Some evidence indicates that high HbA1c levels prior to surgery are strongly associated with the severity of adverse events after CABG[8].

In this study, medical records of 315 open cardiac surgery patients operated in the same center by the same surgical team between June 2012 and July 2014 were investigated consecutively and retrospectively. Patients who underwent isolated CABG with CPB and who were non-diabetic with preoperative serum creatinine levels less than 1.4 mg/dl were included in the study. The number of patients that met that criteria was 202. For descriptive purposes, receiver operating characteristic (ROC) curve analysis was performed to identify the cut-off point with the highest sensitivity and specificity. Patients were grouped according to HbA1c status: < 5.6% (low HbA1c group; group 1) and ≥5.6% (high HbA1c group; group 2).

Exclusion criteria included patients who had peripheral arterial disease, moderate to severe valvular heart disease, decompensated congestive heart failure, congenital cardiac disease, cerebrovascular event in the last 30 days, malignancy, endocrinological disorders (hypothyroidism, hyperthyroidism), low hemoglobin levels (≤10 g/dl), acute infections, emergency operations; patients who had previous diagnosis of end-stage renal disease and who were on dialysis; patients who were reoperated due to hemodynamic instability or bleeding; patients who required intra-aortic balloon pump; patients who had acute myocardial infarction and percutaneous coronary intervention in the last 30 days prior to operation; and patients who were operated on beating heart or redo CABG. A total of 113 patients were excluded from study, as shown in Figure 1. Additionally, patients for whom data on serum creatinine levels or urine output were missing were also excluded. 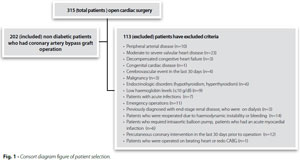 Patients were followed in the ICU in the postoperative period, according to protocols of our institution. Electrocardiography, systemic mean arterial pressure, central venous pressure, arterial blood gases, chest tube drainage, and urine output were monitored. Preoperative and postoperative creatinine clearances and peak creatinine clearance were calculated according to the formulas reported in the literature[11,12].

All of the patients were operated with median sternotomy under general anesthesia and CPB with aortic and venous cannulations following systemic heparin administration (300 IU/kg). Activated clotting time (ACT) was maintained at over 450 seconds during the operation. Standard CPB circuit and surgical management were used. Antegrade hypothermic and hyperkalemic blood cardioplegia was applied to all patients. Surgery was performed under moderate systemic hypothermia (28-30ºC). CPB flow was maintained at 2.2-2.5 l/min/m2, mean perfusion pressure was maintained between 50 and 80 mmHg, hematocrit level was maintained between 20 to 25% during CPB. For the coronary bypass operations, arterial grafts for left anterior descending artery (LAD) revascularization were preferably harvested from the left internal mammary artery (LIMA) whereas saphenous venous grafts were used for the other vessels. Distal anastomoses were done during aortic cross-clamp period and proximal anastomoses were done on beating heart onto the ascending aorta using a lateral clamp.

Statistical analysis was performed using SPSS version 13.0 (SPSS Inc, Chicago, IL, USA). Normal distribution was evaluated by histogram or Kolmogorov-Smirnov test; homogeneity of distribution was evaluated by 'Levene's test for equality of variance'. Normally distributed data were demonstrated as mean ± standard deviation whereas non-normally distributed data were demonstrated as median (minimum-maximum). Difference between groups was evaluated by 'Student's t test' in normal and homogenous distribution and by 'Mann-Whitney U test' in non-normal distribution. Differences between groups were evaluated by parametric or non-parametric Pearson Chi-Square test or Fisher's Exact test with respect to the distribution. Forward stepwise multivariate logistic regression models were created to identify the independent predictors of postoperative AKI. Variables with a P value less than 0.10 in univariate analyses were included in the multivariate model. The sensitivity and specificity of the independent risk factors to predict postoperative AKI were determined by ROC curve analysis. P value less than 0.05 was accepted as significant. Chi-square test was performed for odds ratio. Continuous variables were described as means (standard deviation) or medians (interquartile range), as appropriate; categorical variables were described as percentage.

Intraoperative and postoperative data of the patients are shown in Table 3. ICU length of stay (P=0.004) was significantly different between the groups. 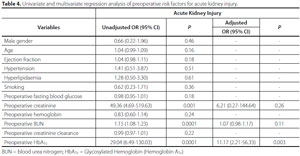 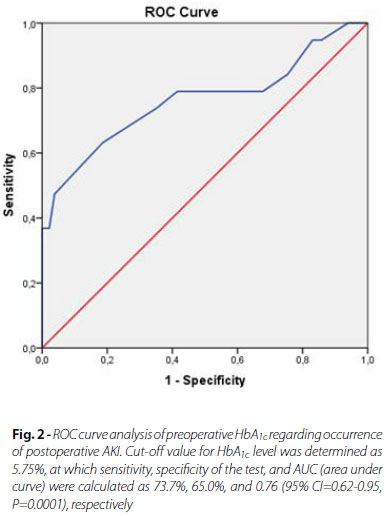 There are some limitations to our study. This study was carried out at a single center, with a limited number of patients, and it was designed as a retrospective study rather than a randomized trial.

Long term survival of patients operated for cardiac surgery is directly proportional to the severity of AKI, which is related to changes in serum creatinine levels[17]. Our results showed that patients with higher preoperative HbA1c levels had higher creatinine levels at 1st, 3rd and 7th postoperative days. Nevertheless, there was no difference in mortality. Instead, there was a significant difference when associated with prolonged ICU stay.

AKI following CPB is an important cause of morbidity and mortality[18]. Postoperative AKI requiring renal replacement has an independent effect on morbidity and early mortality. It is reported that the overall mortality due to AKI is 40-80%[11]. In the recent literature, there are several studies regarding early diagnosis of AKI and prevention of the inflammation process that is an accepted cause of AKI[19,20]. In a study by Freeland et al.[6], blood transfusion was found as an independent risk factor for development of AKI following cardiac surgery. The same study also mentioned that longer aortic cross clamp and CPB times increased the incidence of AKI following cardiac surgery[6]. In a study by Khilji et al.[21], both CPB and total cross-clamp times have been known as potential risk factors for developing kidney injury. In contrast with the literature, we did not find any significant differences between patients with AKI and without AKI regarding CPB and aortic cross clamp times and usage of blood products.

High mortality and morbidity rates following CABG operations have been reported in several studies in patients with type 2 diabetes mellitus (DM)[22]. In addition, some studies have shown that type 2 DM increases postoperative AKI after CABG[23]. HbA1c level is a parameter used to evaluate long term glycemic control in patients with DM[22]. The American Diabetes Association included HbA1c level in the criteria for diagnosing DM[24]. Normal HbA1c levels are accepted as 4-6%. Tekumit et al.[25] found that the borderline level of HbA1c was 6.1% for patients undergoing CABG. In their retrospective study, Hudson et al.[26] reported that preoperative HbA1c levels over 6% were associated with 30-days postoperative mortality and occurrence of AKI in patients without DM who underwent open cardiac surgery.

In our study, patients were grouped according to HbA1c levels, with borderline level being described as 5.6%. Patients with levels higher than 5.6% had significantly higher incidence of AKI, according to KGIDO classification. Our results revealed lower levels of HbA1c than other studies as a risk factor for AKI[27,28].

According to the KDIGO 2012 AKI Guideline, cardiac surgery with CPB is a 1B risk factor[28]. Despite the lack of consensus on AKI and HbA1c levels in patients with no known renal disease, HbA1c over 7% is defined as a Class 1A risk factor for patients with chronic renal disease[28]. The cut-off value for AKI in our group of patients was 5.75%.

Azevedo et al.[29] observed that, in critical illness, there was a significant correlation between blood glucose levels and the incidence of AKI. Halkos et al.[30] found that HbA1c levels greater than 7% were associated with renal failure. Additionally, Gumus et al.[9] found that elevated levels of HbA1c were associated with increased renal complications. Likewise, in our study, a relationship was found between high preoperative creatinine, BUN, HbA1c levels and occurrence of postoperative AKI in our study. It was also observed that average HbA1c level in the preoperative period is a predictor of AKI in the early postoperative period following CABG.

10. Okusa MD, Davenport A. Reading between the (guide)lines: the KDIGO practice guideline on acute kidney injury in the individual patient. Kidney Int. 2014;85(1):39-48. [MedLine]