Over the past decades, different mechanical prosthetic valves have been innovated and refined to be used in both aortic and mitral positions. The choice of optimal valve has been based on the results of numerous studies, regional differences, and the anti-thrombotic treatments available[1]. Besides durability, there are numerous hemodynamic parameters such as pressure gradients, effective orifice area, and energy loss, which dictate the choice for a specific valve[1]. We are now in the era of bileaflet mechanical valves, which have been used for more than thirty years and been proved to provide superior hemodynamics, durability, and low thrombogenicity[2].

The current American and European guidelines for the management of valvular heart disease state that mechanical valve prosthesis remains the 'standard of care' for patients less than 60 years of age who do not have a contraindication to anticoagulation[3,4].

The ideal prosthetic valve is yet to be developed, and several studies showed comparable outcomes among the new generation of mechanical valves[5,6]. Recently, we started to increasingly use the On-X aortic prosthesis due to the advantage of lower anticoagulation targets. The objective of this study was to compare the early hemodynamic performance of the three aortic prostheses that we currently use (On-X, ATS AP360, and Bicarbon).

This is a retrospective study that was conducted on patients who received a mechanical aortic valve as a part of surgical aortic valve replacement (AVR), either isolated or combined with other cardiac procedures. The study was conducted during the period between January 2017 and December 2019. The rationale for using this time period is the fact that we started using On-X aortic prosthesis in early 2017. Data collection was approved by the Institutional Review Board, and patients' consent was waived.

Most procedures (n=93) were performed through a median sternotomy, and six patients had a minimally invasive AVR through upper J-sternotomy. Cardiopulmonary bypass (CPB) and cardioplegia techniques were also influenced by the surgeon. Either normothermic CPB with intermittent warm blood cardioplegia for myocardial protection or moderate hypothermic CPB with single-dose Del Nido blood cardioplegia was used. All valves were implanted in the supra-annular position. Transesophageal echocardiography (TEE) was routinely performed before surgery and after separation from CPB. Most patients' demographic, intraoperative, and postoperative data were prospectively collected in a computerized database. Variables that were not collected in the prospective database were collected retrospectively from electronic records and then added to the database. Pre-discharge transthoracic echocardiography (TTE) was done for all cases.

The age was comparable between groups. On-X valves were implanted more in males compared to Bicarbon and ATS valves. Other preoperative variables were comparable between groups; Table 1 details the preoperative patients' characteristics, concomitant procedures, and valve sizes. Aortic annular enlargement was performed for one patient using the Nicks technique. Approximately 22% (n=22) of patients had small aortic prosthesis; 3% of patients (n=3) had size 16 mm aortic prosthesis and 19% (n=19) had size 18 mm prosthesis. However, we have to point out that 16% (n=16) of the patients had a BSA of 1.6 m2 or less, and 10% (n=10) had a BSA of 1.5 m2 or less. The 5th, 10th, and 25th percentiles for the BSA of the population of this study are 1.4 m2, 1.5 m2, and 1.7 m2, respectively. So, 25% of patients in this study have a BSA of 1.7 m2 or less.

Fig. 1 - The mean pressure gradient of the aortic prostheses postoperatively based on pre-discharge transthoracic echocardiography (TTE) for different valve sizes (18/19 mm, 20/21 mm, 22/23 mm, and 24/25 mm). Size 16 and size 26/27 are not shown in the graph due to small numbers. Even number sizes are for Bicarbon and ATS AP360 valves, while odd number sizes are for On-X. The grouping of the On-X with the Bicarbon and ATS AP360 was based on the nearest external diameter. 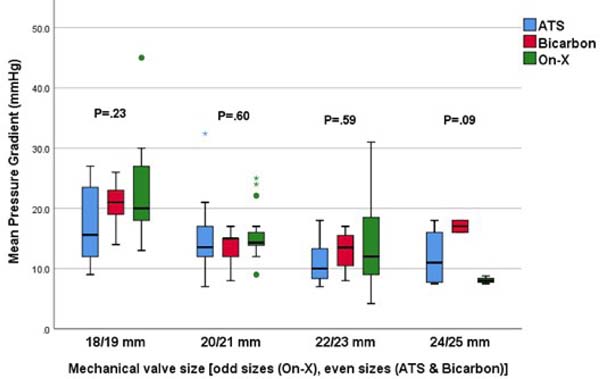 Fig. 1 - The mean pressure gradient of the aortic prostheses postoperatively based on pre-discharge transthoracic echocardiography (TTE) for different valve sizes (18/19 mm, 20/21 mm, 22/23 mm, and 24/25 mm). Size 16 and size 26/27 are not shown in the graph due to small numbers. Even number sizes are for Bicarbon and ATS AP360 valves, while odd number sizes are for On-X. The grouping of the On-X with the Bicarbon and ATS AP360 was based on the nearest external diameter.
Table 4 - Aortic mean pressure gradient (mmHg) at four-time points.

* P-value is based on repeated measures analysis. Repeated measures analysis did not show a significant difference in MPG between the three aortic valve types over the four-time points (Wilks' Lamda P=0.08). However, the change in MPG across the four-time points was significant for all three valves (Wilks' Lambda P<0.001, Partial Eta Squared=0.295). Pairwise comparison between the time points are all significant (P<0.001 for time 1 vs. time 2, time 3, and time 4; P<0.001 for time 2 vs. time 3; and P=0.006 for time 3 vs. time 4). The estimated marginal means adjusted for valve sizes are depicted in Figure 2.

* Male is the reference group

In this retrospective study, including 99 patients who were operated during the same time periods between 2017 and 2019, we compared early hemodynamics of three different types of commercially available bileaflet mechanical aortic prosthesis (On-X, ATS, and Bicarbon). All three valves provided satisfactory and comparable early hemodynamics. The mean pressure gradient for the three valves was comparable over time up to six months. There was a trend of higher mean pressure gradient with the Bicarbon valve; however, that did not reach a statistical significance. Moreover, this nonsignificant difference is likely explained by the more prevalent small sizes (sizes 16 and 18) in the Bicarbon group compared to other groups. Indeed, on multivariable linear regression analysis with adjustment for valve sizes, the prosthesis type did not influence the mean pressure gradient.

This is the first study that compared these three mechanical valves head to head, but other studies have shown similar results with other valid comparisons. Walther et al. compared On-X and St. Jude HP aortic valves in 40 patients and found no difference between groups regarding the maximum pressure gradient, both postoperatively and after a one-year follow-up[8]. Xu et al. compared the early hemodynamics after AVR with On-X and St. Jude prostheses. Each group had 33 patients, and they found no difference in postoperative peak gradient across the prosthesis in both groups. However, for the valve size 25 mm, On-X valves had a lower peak gradient but no difference in the effective orifice area[5]. We found a similar finding where there was a nonsignificant trend towards lower mean pressure gradient in the 25 mm On-X valve size compared to 24 mm ATS and Bicarbon valve sizes (P=0.09), as depicted in Figure 2. 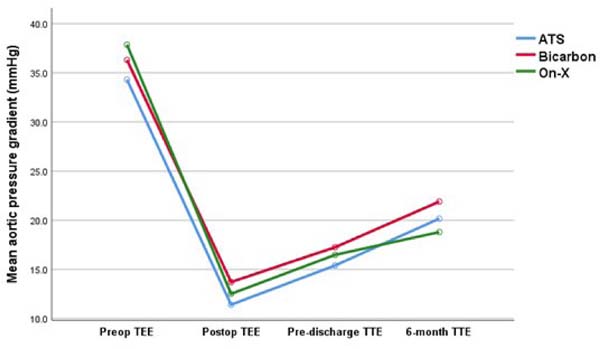 Approximately one third (31.1%) of our patients in the present study received small aortic prosthesis (size 19 or smaller), and since those patients had a smaller BSA compared to patients who received larger prosthesis, we had satisfactory results with small sizes' valves with a mean gradient of 14.5±6.2 vs. 11.5±5.4 mmHg in the small prosthesis group (prosthesis size 19 mm or smaller) and the large prosthesis group (prosthesis size > 19 mm), respectively (P=0.01). Kato et al. examined short and mid-term outcomes on 78 patients who underwent AVR with ATS prosthesis size 16-18 mm and SJM Regent size 17 mm. They found that the postoperative pressure gradient of the ATS AP 16 mm group was significantly higher than that of the ATS AP 18 mm group; however, the left ventricular mass decreased substantially during the follow-up in all groups, and the extent of reduction in left ventricular mass was similar among the groups (-30%, -25%, and -28% in the 16 mm ATS AP, 17 mm Regent, and 18 mm ATS AP groups, respectively; P=0.844). They concluded that standard AVR using these small mechanical valves, which avoids the need to enlarge the annulus or to conduct more complex stentless bioprosthesis implantation, might represent an acceptable solution, especially in elderly patients with a small aortic root[10].

In our study, there was no valve-related bleeding or thrombosis up to six months for all three prosthesis types. Since all three valves have similar early hemodynamic profiles, we see the advantage of the On-X valve in terms of lower anticoagulation target International Normalised Ratio (1.5-2), which can reduce the incidence of bleeding complications. Indeed, in a recent multicenter, long-term study by Chambers et al. including 691 patients who had an AVR and MVR using On-X valves, the late rate (mean of 5.2 years) of aortic valve thromboembolism, bleeding, and thrombosis were 0.6%, 0.4%, and 0%, respectively[11]. Nevertheless, we also see the benefits of other mechanical valves (ATS AP 360 and Bicarbon) especially in patients with small BSA and small aortic annulus as the smaller size for On-X aortic valve is 19 mm, while both ATS and Bicarbon valves are available in smaller sizes (16 mm and 18 mm). It is important, however, to determine the indexed effective orifice area before deciding to implant these small aortic prostheses to avoid significant patient-prosthesis mismatch.

This is a retrospective single-center study with the inherent limitations of this study design, including selection and information bias. Another limitation is the small sample size. Additionally, the subgroup analysis by the valve size category is limited by the small sample size and is not powered to detect potential significant differences, as it is evident by the wide 95% confidence intervals. For future studies, we estimated that a sample size of approximately 471 patients is required for adequately powered subgroup analyses to compare the mean aortic pressure gradient of various valve sizes. Furthermore, many variables that may affect the outcomes may be unequally distributed between groups. However, we performed a multivariable regression analysis to adjust for these confounders that may have affected the postoperative mean prosthetic valve gradient. Finally, we only reported early (six-month) outcomes, and therefore, we cannot make comparisons about long-term outcomes between these three mechanical valves.

KDA Substantial contributions to the design of the work; analysis of data for the work; drafting the work and revising it; final approval of the version to be published

EH Acquisition of data for the work; drafting the work and revising it; final approval of the version to be published

AA Substantial contributions to the design of the work; revising the draft of the work; writing the final manuscript; final approval of the version to be published

MAS Substantial contributions to the design of the work, acquisition of data for the work; revising the draft of the work; final approval of the version to be published

HHE Acquisition of data for the work; drafting the work and revising it; final approval of the version to be published

CP Substantial contributions to the conception and design of the work; revising the draft of the work; final approval of the version to be published

TBA Substantial contributions to the conception of the work; supervision; drafting the work and revising it; final approval of the version to be published